Are you prepared for something infernally awesome? The Finland Blackened Death Metal masterminds have re-released their 2011 album “Tenebrous Towers” in all of its glory. This was done through the good people over at Hellthrasher Productions. You can now grab the album by CLICKING HERE.

In celebration of this, we’re streaming the reissued album in its entirety through YouTube. Have a listen and be careful not to damage yourself from the ensuing headbanging. Calling this record great might be an understatement.

With a steady output of three full-length albums throughout the first half of the 2010s (the latest two on Dark Descent Records), Finland’s purveyors of chaos and wrath, Desolate Shrine, proved to be one of the most consistently crushing death metal acts, that appeared in the underground scene during the past five years. Originally released in 2011 through Hammer Of Hate, “Tenebrous Towers” opened up the band’s journey to the abyss with seven tracks of possessed, atmospherically rich blackened death metal, interspersed with chilling acoustic sections and inhuman dual-vocal attack. Out of print for a while, the album will be available again on CD (out October 16th 2015) and for the first time on vinyl (scheduled for 2016 release). The CD reissue will remain faithful to the original version both in terms of master recording and artwork/packaging (jewel case with 16-page booklet). Desolate Shrine’s multi-instrumentalist, LL, recalls the band’s beginnings:

“Tenebrous Towers had been brewing a long time in a form or another. It was and is way more inspired by the 90´s swedish death metal than its follow-up albums. The songs were written during a chaotic and bizarre period between summer – winter 2010. At the moment there was no singer(s) and no idea about the future but after R.S. and M.L. joined, everything clicked right away. Tenebrous Towers is absolutely spontaneous and hate-fueled work that is a perfect representation of the band´s state of mind at that time.”

1. The Smell Of Blood And Iron
2. No Place For A Human
3. Crushing Darkness
4. The Brightest Night
5. Chaos And Wrath
6. Born To Lose One’s Way
7. Burning Devotion 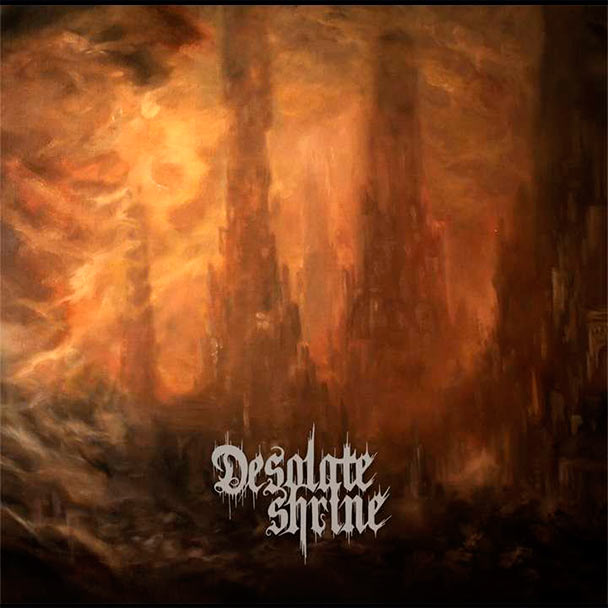