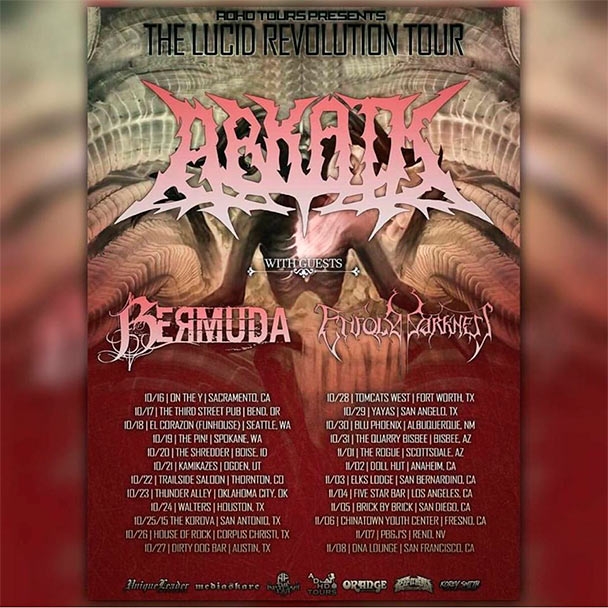 Heads up with some bad news here. Enfold Darkness were forced to pull out of the impending tour with Arkaik and Bermuda due to an injury close to home. We wish best of luck to the band, Greg Vance, and his girlfriend in this situation.

Hey guys. We have some bad news. Unfortunately, we regret to inform you all that we won’t be able to do the Lucid Revolution Tour with ARKAIK and Bermuda.

A few days ago, our drummer, Greg Vance‘s, girlfriend got in a car accident in which she suffered some very serious injuries. I won’t go into too much detail about it here so that we might respect Greg and his family’s privacy, but two and a half years ago, Greg and his girlfriend moved to Nashville so that Greg might join the band. Greg and his girlfriend have no one here besides themselves. The plan was while we were out on tour, his girlfriend was going to hold down the fort, but as she is now incapacitated for at least the next month, she won’t be able to work or even take care of herself. Due to this, Greg decided that he would not be able to do the tour with us.

Usually, we would get a fill-in drummer when something like this happens (which we have looked into it, naturally), but because this incident has befallen us so close to the beginning of the tour, we really have no way to cover all the expenses that we would accrue from transporting a drummer with his drumkit from the West Coast (it being the only region that we have found drummers whom would be available) to Nashville. Preparing for this tour was very expensive to begin with, and our coffers are dry.

With that said, we are super bummed that we cannot make the tour. We were really looking forward to getting back out to the West once again since it has been over three years since we have been out there last. We apologize to our fans who were looking forward to finally seeing us live once again or for the first time… but take heart! This most certainly isn’t the end. We will be back on tour soon enough.

Many apologies also go out to ARKAIK, Bermuda, the booking agents, and promoters who worked hard to make this tour happen.