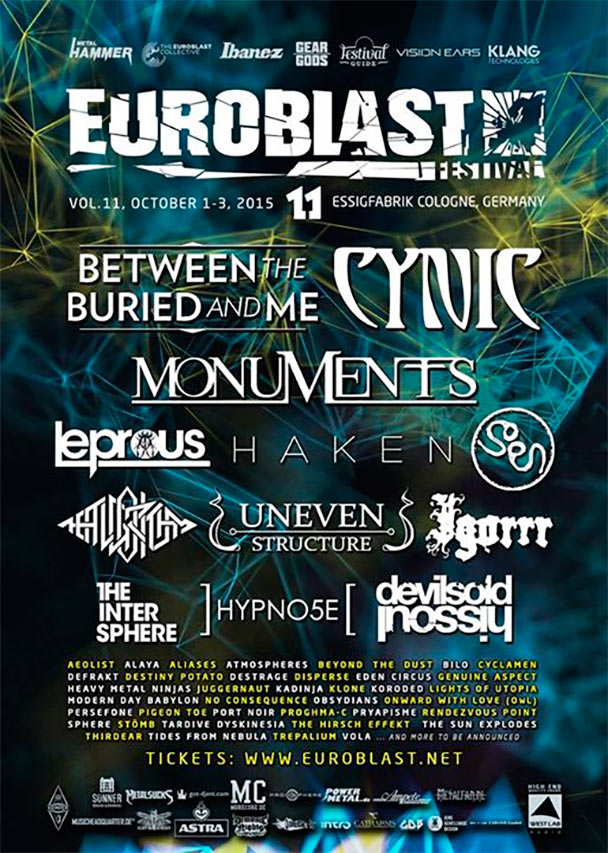 Go on say it out loud.

Sounds impressive doesn’t it. As it should do. This highly entertaining North German city has a lot to recommend it to tourists; the immense Cathedral, the mighty river Rhine and an ever growing café culture. Well I’m not here for any of that. I’ve traveled to Rhine-Westphalia to attend Euroblast, mainland Europe’s Premier progressive music festival. Situated in an ex-Vinegar factory on the southern bank of the city’s aquatic artery, it’s line-up services a wide variety of progressive and Djenticular needs. From the mesmeric and ethereal to the brutish and spectacular, it really does encompass every nuance that the densely faceted word, progressive implies.

The festival starts on a Thursday, because, well I don’t know why. But if I had to guess I’d say its because the Germans always like to have a law they haven’t told you about, in the hope that you will unwittingly break it. Such randomness aside, the first band I saw was the tautologically named Proghma-C, who seem to be caught in the headlights of their own hypnotism. While their music is weighty and full of frenetic impulse, they lack that same energy in physical performance. Several times their music lurches towards epic grandeur without the requisite technical subtlety to achieve it. But having said that, if they up their song-writing game a little and find some way of making the vocals more distinctive, then I’m certain they could become a highly entertaining proposition.

Proceedings here at Euroblast have got off to a slightly juddering start, with the main stage festivities starting 15 minutes late, which means that stage time cross-overs become even more obstructive than they appeared on paper, meaning even though I ran (breaking secret German law 71265) to the subterranean 2nd stage, I manage to only catch the final 10 minutes of Stomb. I have heard this youthful 5 piece described as being like a proggy Vildhjata, but if I am to be honest, they struck me as being neither thoughtful nor selectively brutal enough to warrant such comparisons. But my old geezer gripes aside, the place is packed and resounds with sweat dripped and energy expended; so who am I to judge, especially not having seen their whole set.

Next on my agenda are Heights, who are fresh from performing at the Basick records 10th birthday party. They delight the main stage crowd with their delicate, nuanced songwriting which they compliment with adept and impassioned playing. That they do hold such a large crowd enthralled owes nothing to their stage craft, which consists fundamentally of standing up, is quite a feat. But they have pretty guitars and sell their new-wave inflected prog effortlessly. Their tonal palate is almost soulful, which plays up to the hidden complexity within their music. Mmmmmm, nice!

I had a drink. I had some food. I nipped back to the car to do this. We’d parked close to the venue the day before. Boxing clever. We’re Floyd Mayweather when we travel.

I boom back to the big box just in time to see Destrage hit the stage, injecting some much needed punkish energy into proceedings. If you haven’t seen them before, I highly advise you to catch Destrage live; they are all knee socks and light up fret dots; a full dose of professional rock’n’roll stupidity. Their stage show is highly kinetic and their music an avalanche of riffs covering a maze of progressive intent. So there is pretty much something for everyone when it comes to a Destrage show. These boys tour a lot and are well schooled in ignoring technical fuck-ups. Even when the lead vocal mic cuts out completely, the performance of the vocalist did not betray this in the slightest. Sir, I salute you and your stoicism in the face of shit electronics.

OK, so I may have had access to backstage. There may have been free beer. I may have had a few. Well a couple at least. But nothing untoward you understand, just nicely oiled. Plus I was eager to hear Soen, as I’d quite enjoyed their debut, Cognative, when I heard it a couple of years ago. But I must say, live, I was distinctly underwhelmed. Their music is pretty much Tesseract meets Opeth, but without any of the charisma or randomised invention of those groups. If I’m to be honest, each song didn’t really have enough to differentiate itself from its neighbour. The drums spiraled round and round, the guitar did like-wise, the bass followed suit, there was a Viking with a shaker and a keyboard who occasionally picked up a guitar when his encyclical bean based piano assault wasn’t sufficiently homogenised. But I don’t mean to be rude, they played it well and the vocals were clean and crisp, but in the middle of the day, in an industrial estate rather than stoned and in a field, it was boring.

Time runs away from you at Euroblast, one minute you’re shielding your eyes from the sun wondering how you are going to remaining standing for the next 8 hours, the next the main support band are about to start. Well it does for me anyway.

The main stage is packed. Perhaps due to the newly enforced “No re-entry after 7pm” law, which we are told has been enforced due to multiple complaints by local residents about the amount of “human traffic” outside the venue. Now I am not casting aspersions on any of the Euroblast organisers when I say that, there are no local residents. This is a riverside industrial estate, next to a flour factory with a beautiful Lilo shaped silo and the headquarters of Volvo.de across the road. Functional yes, residential it most certainly is not.

So we are all inside the venue kind of against our will but not really, after all Haken are about to take the stage. Now over the years, I’ve really fucking tried my best with Haken. I’ve seen them 5 times; squeegeed my mind clean and opened it with a crowbar, putting myself in the best position to be blown away, and yet I’ve never understood why they enthral so many. How-fucking-ever, tonight was to be the night for me and Haken. Finally at the fifth time of asking they finally made great globs of sense.

For an almost perfect hour, they swooped, wove, dived and entwined a judiciously chosen set together into one amazing fabric. Playing pure hard-bop-prog with solos being fully participated in by every member. They displayed their full Jethrow Tull brought up to date potential. The central 30 minutes of the set was basically one continuous crescendo crashing upon the rocks of the audience. They were bold, extravagant, gorgeously harmonious and pitch perfect vocally. I can’t really fault anything they did and as I said I’m not really a fan.

Upon returning home I went back to their records to see if I had been permanently weakened in the face of Hakenistic brilliance. Nope. Still not a fan, but on that night, at that show, they were quite phenomenal.

So wiping my eyes and slightly emotional I head down towards the second stage, forbearing the compulsory night blindness as you enter the venue, to see the last 15 minutes of Trepallium. What they do is entertaining enough. I mean it bounces along and is quite fun and all that, but its basically Death Metal for strippers. Seriously, you can’t include that much wah-wah in your riffs and not be making porno soundtracks. They put on a fun show and I’m appropriately drunk to enjoy it but I was never a big fan of Rob Zombie and it’s the only trick Trepallium have got up their sleeves. Better luck next time lads.

BTBAM are great, and a lot less soulless than I’m expecting. In fact, I see one of them nearly emote halfway through their set. But in all seriousness they put forth a flawless performance of a wide spectrum of songs, from their entire back catalogue. Their playing is without fault, textures, tones and nuances are exactly where you know them to exist. Everything sounds precisely like it does on the record.

AND THAT’S THE PROBLEM!

If I wanted to hear recorded music, I’d listen to some recorded music, at home. Not in a sweaty venue, drunk out my box and 569 miles from home. This is a festival, give us a party, a sense of drama something to remind us that you men on stage are not a collection of cyborg Music Machines sent from the future to play prog metal.

They are amazing musicians, its just they are missing someone to turn their glorious parts into actual songs.

Day One over. The fun has just begun.