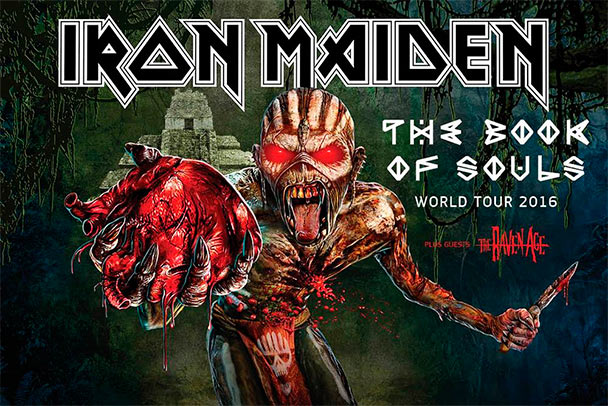 For some time now, it’s been known that Iron Maiden are preparing for world domination. They will be hitting 6 out of 7 continents and traveling 55,000+ miles with a Boeing 747 on their upcoming world tour! As such, they’ve been rolling out the dates bit by bit in anticipation of the grand trek. The latest batch of dates are directed towards the United States. They are the following…

The one and only Bruce Dickinson had the following to say of this:

When we play in Fort Lauderdale, it will be 19 months since our last show at Sonisphere in the U.K. so we will be raring to go.

On previous Ed Force One tours, we only had time to play New York, L.A. and Florida. For the world tour next year, we’ve made more time in order to take Ed Force One to our fans in many more parts of the country, like Tulsa where we haven’t played since 1987 on the ‘Somewhere In Time’ tour and Tacoma, where we haven’t played in 15 years, along with Vegas, Detroit, Chicago and Denver too this time round.

We wanted to start off in Ft. Lauderdale, so we could first visit Nicko’s [McBrain, drums] Rock ‘N’ Roll Ribs nearby and have a few Trooper beers to celebrate the start of ‘The Book Of Souls’ world tour!

We will, of course, visit Canada too and those dates will be announced very soon!

We haven’t decided on the set list as yet and won’t until we start rehearsing, but we really look forward to playing a number of new songs live, especially as the recording was so much live. However, as it’s been a while since we saw you all, I am sure we will include plenty of older fan favorites too. I think the fans will be delighted by what we have in mind. We are also in the middle of creating the new show, and rest assured we are working hard to bring you all something spectacular, something with a lot of heart!!! You certainly deserve it for your patience.