It’s happening! An all new Obscura album has just been announced with a release date slated for February of next year! It will be known as “Akróasis” and you can get your first taste of it right now! The band is currently streaming an album teaser that sounds legendary. You can find it along with all the information you could possibly want at this point in the official press release down below. If this serves as any indication, 2016 may very well be a great year for metal music!

It has been five years since the release of Obscura’s universally acclaimed Omnivium album. Now the progressive metal masters return with their strongest and most dynamic release to date. The aptly named Akróasis (Greek for “hearing” or “listening”) draws on all the various elements of Obscura’s signature sound and combines those qualities into a cohesive and mind-blowing whole. A trailer featuring samples of new music from Akróasis can be seen here:

Akróasis will be released February 5, 2016 via Relapse Records. The album will be available in CD, 2xLP and Digital download.

“With Akróasis, we produced our grand opus featuring eight songs of fluent arrangements, odd time signatures never heard before in metal, and the most high end production in the history of the band. Without question Akróasis is the heaviest, most complex record we have made to date. We cannot wait to perform live again and bring this excellent music to stages around the globe,” says Obscura founder and frontman Steffen Kummerer.

Produced by the band and V. Santura (Triptykon, Pestilence), Akróasis is eight songs diverse enough to serve as a near-comprehensive introduction to all of extreme metal. Packed to the gills with virtuosic musicianship, compelling themes, and airtight songwriting, Akróasis will undoubtedly breathe new life into death metal, progressive metal and beyond. 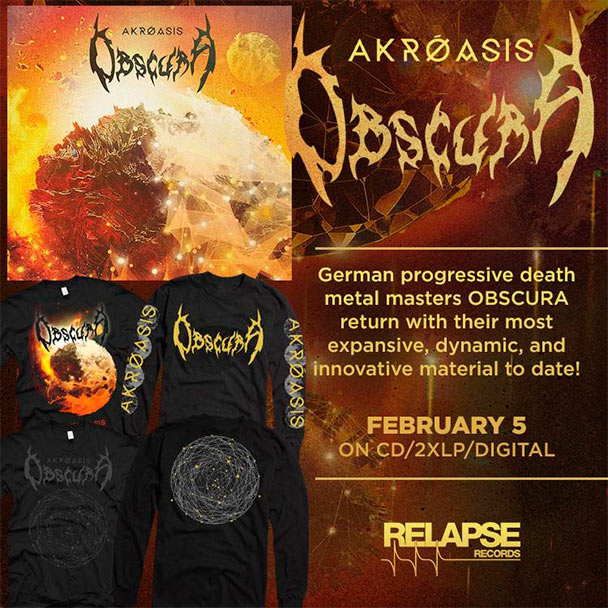