Born Of Osiris, Veil Of Maya, After The Burial, ERRA, Bad Omens Tour 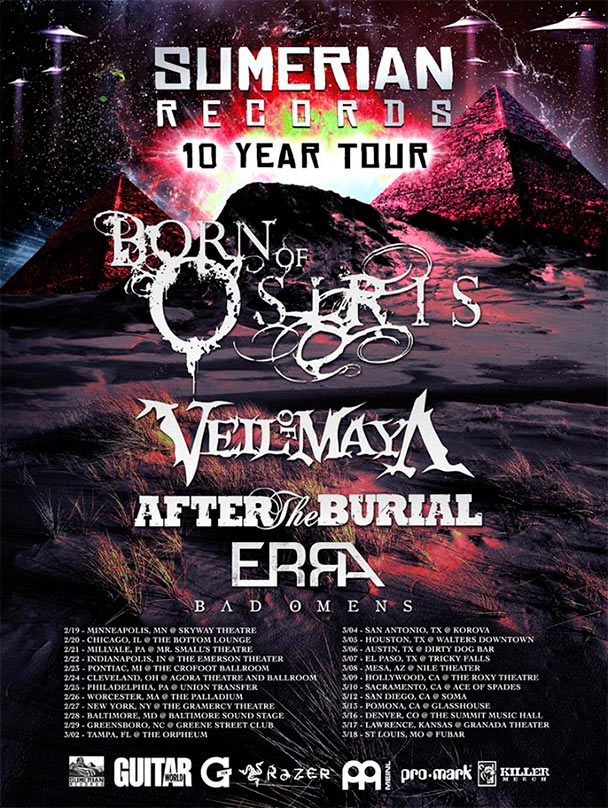 It’s probably about time this happened again! What many consider to be the original Big 3 of Sumerian Records will be colliding together on tour to celebrate the 10 year anniversary of the record label. They are Born of Osiris, Veil of Maya, and After The Burial! On this trek, they will also be joined by some of the label’s newest signees – ERRA and Bad Omens. This will be taking place across the United States in February and March of next year. The dates are on the flyer above and music from all the bands can be found below. It should be a great time to say the very least.

Here’s what Sumerian Records owner Ash Avildsen had to say about this:

“Born of Osiris, Veil Of Maya, and After The Burial have all played a crucial role in the new wave of progressive, heavy music and in the pedigree of Sumerian. They are some of the most genuine, hard-working and talented musicians I have had the privilege to work with. I vividly remember first seeing all three of them play together at a tiny legion hall in a small town in Illinois when Sumerian was less than a year old and they were all unsigned. I can proudly say that without BOO, VOM and ATB together on the label, Sumerian would not have become the entity it is today. I am honored to have this midwest menagerie be carrying the 10 Year Tour and excited for our new comers in ERRA and Bad Omens. Thank you to all the fans who support the bands and the music. Without you, none of this would be possible. See you in the pit.”

On a similar note, After The Burial also had the following to say:

“10 years ago we were all local bands playing anywhere we could. We had a passion for our music that we wanted to share with the world. A decade later we’re still here, carving out our place. We hope that you’ll join us for an evening to celebrate.”