We recently asked the great people of The Circle Pit the following question – “Who’s the coolest musician you’ve ever met?” In response, we got well over 200 answers, all of which you can look at by clicking here. Having also met a lot of awesome musicians in our time, it only seemed appropriate to let your voices and experiences be heard. So we’re sharing some of the responses and stories here for everyone to see! These are the coolest musicians ever.

“Trevor Strnad from The Black Dahlia Murder. Such a rad dude. – I didn’t realize who was having a conversation with while we were looking through a CD bin at a festival, until I looked up, and recognized him. Lol. I did the double take, we had a chuckle and kept bullshitting about albums.”

“The guys from Thank You Scientist made a human pyramid with me and my buds in the middle of a crowded bar just to get a goofy picture. Those guys are all awesome.” 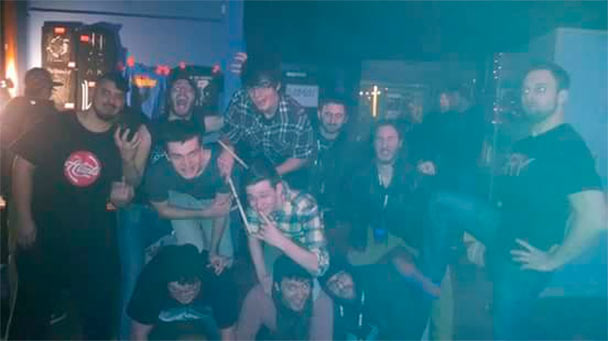 “Dimebag and Rex Brown from Pantera! Had shots with them at RUSTYS BILLARDS in Arlington, Texas.”

“I played a gig with the Ramones back in the 80’s. We hung out after sound checks, drank Yoo-Hoo and threw around a Nerf Football. It was awesome.”

“Stef from Textures… One of the nicest dudes I’ve ever met, actually! The whole band were cool with me and they even dedicated a song to me at the show after a pretty deep conversation… A night I’ll never forget, thanks to them!”

“The guys in Ghost after their San Francisco show out of costume :) Super Nice dudes and have no problem having long Conversations with you.”

“I’m jamming with Arif from Protest the Hero every week for my school ensemble and he’s the chillest, most down to earth guy I have ever met. Oh, and he brought his buddy Aaron Marshall from Intervals when he couldn’t make it from a tour and Aaron is also a cool guy.”

“Phill Anselmo hugged me even though I ran up to him like a fucking puppy. Even smiled when he signed my battle vest.”

“Wes Hauch and Evan Brewer smoked me out after a Faceless show one night a couple years ago. Rad-est most chill dudes ever. Best show experience to date.”

“C.J. MacMahon from Thy Art Is Murder, without a doubt. The guy was the main merch guy AND the frontman, talking a joking with fans. This guy is so human and I talked with him about what life is while being in a band as big as TAIM. He conviced me to never give up my ideas but to think real hard about it. Because the life of a metal musician ain’t about glamour and glitters but more like Ramen flavor packs. But he told me that he wouldnt give this life away for anything, even if it’s hard for the friends and family back at home. A true artist, really inspiring.”

“I cornered Leo Kottke backstage once and got him to sign his original “6 & 12 String Guitar” album, for a finger picking nut it was like a brief audience with god. And he was cool about it, though surprised to see the recording.”

“The guitarist from Mastodon hugged me.”

“I met Eddie Hermida when he was in All Shall Perish. He was a great fuckin dude. They all were. – We opened up for them in STL years ago, I was putting oil in my truck after the show and Eddie asked if I needed any help. Dude’s super awesome.”

“Steve Vai. Met him at guitar center in Manchester, CT and he taught me all about how a headphone amp (Pandora) that he endorsed worked. Total class.”

“Waylon Revis from Mushroomhead we partied all night and I didn’t realize it was him. He didn’t actually any different then anyone else there.”

“Carl Schwartz from First Blood. Such a genuine, nice guy. He even gave me a banana.”

“Bjorn Strid of Soilwork. I did a vocal lesson with him a few years ago and it was one of the coolest experiences of my life.”

“The band Tribulation. After the venue denied my backstage pass to meet Behemoth I was chilling by their merchandise stand talking to them and they’re super chill.”

“Me Thomas Erak from The Fall of Troy back in 2008. He was drinking at the bar before their set, listening to the local acts and chatting with everyone that approached him. Great dude. Also met everyone in Every Time I Die a couple of years ago. So fucking chill. Andy Williams is the nicest dude.”

“I made Guacamole for Aborted. That was pretty cool.”

“Make them suffer, sick lads, they all came from backstage to sign my little drumming booklet.” 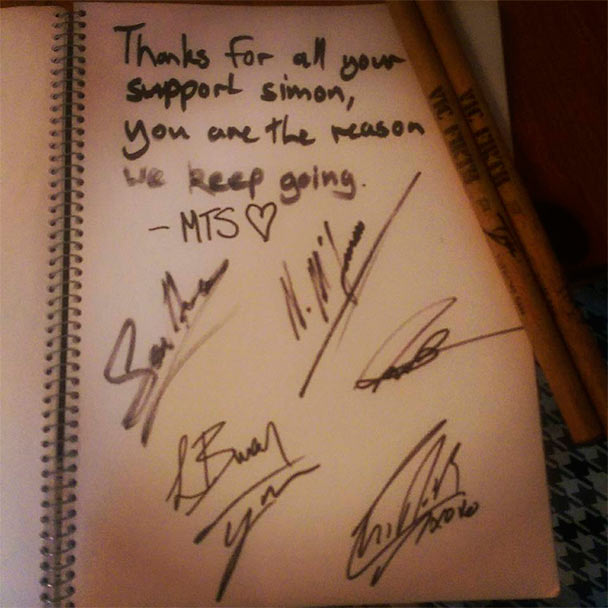 “Joshua Travis from Glass Cloud, saw him at the slot machines on my bday. Sat down had some drinks and all the dudes from With Dead Hands Rising. Crazy group.”

“Quite a few…. But having drinks with Jeroen Paul Thesseling (Obscura) was definitely cool. Down to earth dude. We just talked about normal things over a few beers.”

“Justin (R.I.P.) from After The Burial. Chatted a few times at a few shows, great guy, very down to Earth. I sensed no issues?”

“Most inspiring: Chris Jagger (Mick’s brother), Most funny: Jason Reece (And You Will Know Us By The Trail Of Dead), Most heartly: Jonathan Vigil (plus the whole The Ghost Inside Crew), Most friendly: The Modern Age Slavery, Most down to earth: Six Reasons To Kill, An artist you’d want to get to know and become friends with: Valentin Hauser (Betraying The Martyrs), Jonathan Albrechtsen (Scarred By Beauty) Dennis Müller (KMPSPRT) and more …there are tons of other artist i’ve met (also some really ignorant and arrogant ones).”

“The most recent saxophone player for the English Beat. It was pretty cool got me on the tour bus and then I got him some free pizza from where I worked.”

“Met a lot of band guys but Brandan Schieppati from Bleeding Through was down to earth and cool as fuck. Made me love the scene and music in general.”

“Joe Haley of Psycroptic. Dude seems like an introvert in interviews but he’s pretty easy to approach and talk to. No intimidation factor whatsoever. Cool guy.”

“Joe from Born of Osiris. Super nice, down to earth, seemed to genuinely appreciate his fans. It was like having a conversation with any normal dude, in no way intimidating or offputting.”

“I don’t know his name but the vocalist from deafheaven shook my hand and had a brief conversation with me at tremont music hall last year when they came with BtBaM. Very polite guy.”

“Alex Webster (Cannibal Corpse) is a cool guy. We bullshitted about the cost of fuel and random non music stuff and he signed my ticket stub.”

“Chris Garza from suicide silence he chilled with me and my boys for 45 minutes and just talked about nothing with us before the show.”

“Tosin Abasi was such a humble and kind man. I’ll always support AAL.”

“The Acacia Strain guys. I played the JFC intro on my bluetooth speaker and they told me to, “Shut it the fuck off. We already know that song.” because Vincent was sleeping. I told them to spit in my face again cause that was brutal.”

“Randy Blythe and one of the members of Tyr, I have trouble remembering his name. Anyway, Randy signed my copy of the book he wrote.”

“Matt Heafy, or Misha. Or the Dudes from The Contortionist, or Drew From Chon. Or Pretty much any musician I have ever met in the metal scene.”

“I didn’t get a long conversation with him, but Devin Townsend was a great guy. One of my favorite people.”

“Dave Grohl hands down, but a second and very honorable mention would be Tomas Haake from Meshuggah.”

“Joel Omans of Animation Sequence and ex-rings of Saturn was a pretty chill dude! Ian Bearer is also pretty lax. Really Rings of Saturn as a whole is pretty dope!!”

“Rody from protest the hero was pretty cool. And Mike Lessard from The Contortionist was one of the coolest guys ever.”

“Everyone in Darkest Hour were really cool. Met them around the time Deliver Us came out. Also the lead singer of Decrepit Birth. That dude puts the evil on you.”

“Everyone in Fuck the Facts is awesome to talk to at shows, Homewrecker and Noisem were really cool too.”