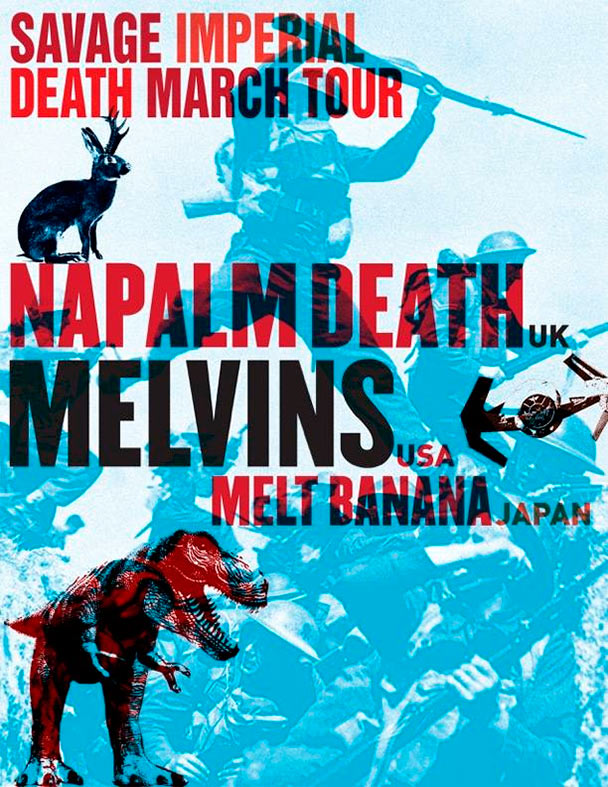 There’s one hell of a tour slated to smash North America March through May of next year. The legendary Napalm Death with be heading the event with direct support from (the) Melvins and Japan’s very own Melt-Banana. It will be known as the “Savage Imperial Death March Tour”. These events are, more or less, guaranteed to be absolute madness as all of these bands bring an unparalleled energy along with them. You can look over the flyer up above and find the dates down yonder. And, of course, we’ve included music for all of the bands!

Here’s the official word in regards to all of this:

Napalm Death and the Melvins join forces for the Savage Imperial Death March Tour, a six-week Spring trek that that kicks off on March 26 at The Marquee in Phoenix, Ariz.

“We have been talking about doing a tour like this for a long time so we are thrilled it’s finally happening,” says Napalm Death bass player Shane Embury. “Having been long time fans and friends of the Melvins we are very happy to be embarking on this six-week tour of musical madness with them and Melt Banana. Expect the unexpected!”

Melvins’ singer/guitar player Buzz Osborne added: “Napalm Death sounds like a gorilla on LSD firing a machine gun… and I mean that in a good way. We’re happy to be heading out with the ultimate grindcore pioneers.”

This isn’t the first time the two bands have collaborated. In 2004, Buzz Osborne, Shane Embury and Danny Herrera played together in Venomous Concept, with their debut release (Retroactive Abortion) coming out via Ipecac Recordings.