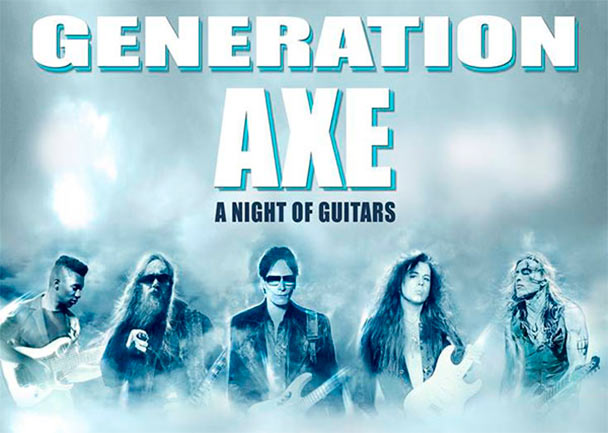 Guitar nerds listen up! This is Generation Axe, a touring super group made of expert level stringsmen Steve Vai, Zakk Wylde, Yngwie Malmsteen, Nuno Bettencourt, and Tosin Abasi! They’ll also be supported by Pete Griffin (not to be confused with Family Guy) on bass and Nick Marinovich on keys. If there was ever an event to make you want to put down the guitar… this is it.

You can find an official statement along with a list of dates below. You can also check the Official Website for more information. Good day, sir.

“The ‘Generation Axe’ fan experience will go way beyond simply gathering five guitar greats on one stage to jam. Each tour stop will include a variety of collaborations by the five players, including everyone performing together as one cohesive band with a rhythm section including Pete Griffin (Dweezil Zappa, Stanley Clarke, Edgar Winter) on bass and Nick Marinovich (Yngwie Malmsteen) on keys. Vai, Wylde, Malmsteen, Bettencourt and Abasi will perform songs from their various catalogs and join forces on some well-known songs (as well as probably a few unexpected, unearthed gems).: