Women Who Mosh – Kayla Phillips of Bleed The Pigs 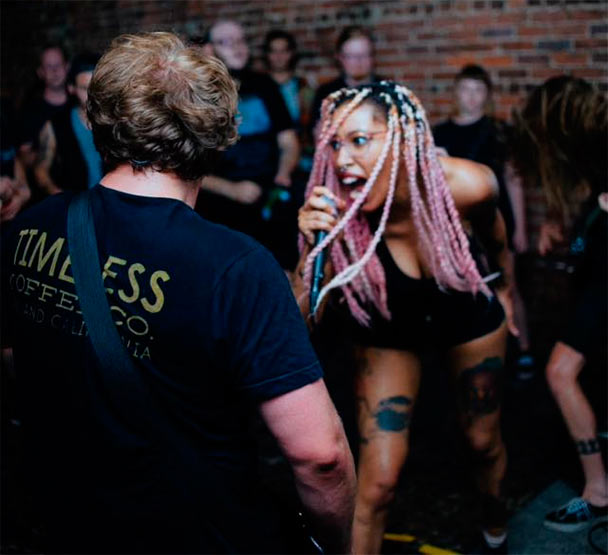 Erupting from Nashville, Tennessee comes a band that plays anything but the local fare country music. If anything, the sound Bleed The Pigs brings could be considered the polar opposite. They a band mashing together all kinds of chaotic sounds and could be categorized under Grindcore, Hardcore, Powerviolence, and Punk all at once!

Furthermore, they’re known for bringing a wicked live show and have many recordings under their belt. In fact, they put out three releases just last year! All of their music is available for a “name your price” download over on Bandcamp if you’d like to add on to your collection.

In honor of this segment, we’d especially like to point out the ferociously artistic front lady Kayla Phillips. With swinging pink dreads and a viciously metallic vocal aptitude, she serves as the face of Bleed The Pigs on and off record. Besides making music with the band, she also makes a good bit of the artwork used by Bleed The Pigs. Furthermore, she suffers from pulsatile tinnitus but doesn’t let it slow her down – even running a heavy noise project quite literally called Pulsatile Tinnitus. All respect to Kayla and what she does. Mosh on!