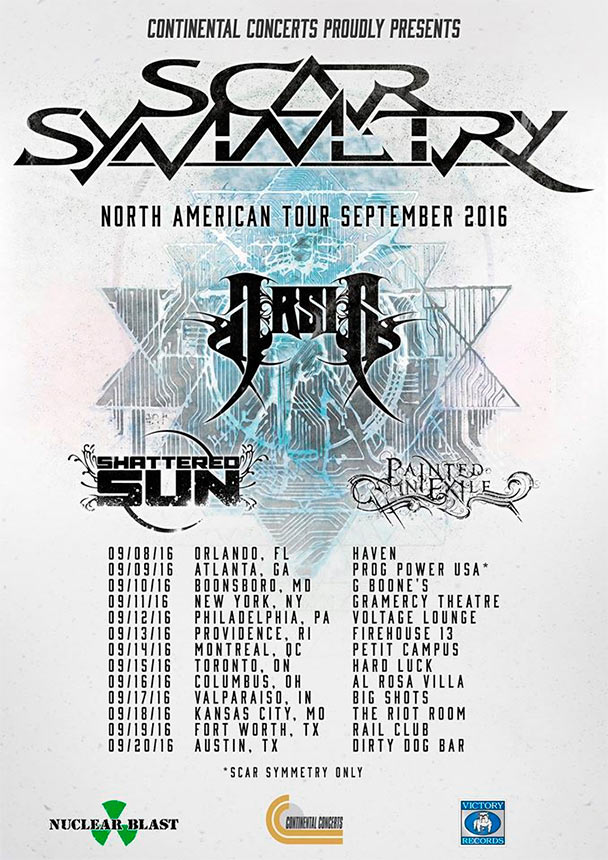 7/14/16 UPDATE – The dates are here! You can take a look at the updated flyer up above. Good music incoming! Scar Symmetry also just released the following statement:

We’re proud to announce the dates and venues for our first North American headlining tour this September! As you can see, we’ve chosen to keep this tour on the short side – but rest assured the shows will be of full length and girth! With us on this metal pilgrimage we have Virginia tech-death overlords Arsis, Texas metalcore masterminds Shattered Sun and New York prog professors Painted In Exile.

Out of all the tens of thousands of cities in North America, we have chosen to grace a mere eleven with our presence which is bound to leave some of you disappointed – but trust me, if this tour is a raging success I promise you we will come back early 2017 for another bunch of shows (yes California you’re on our mind too)! For now, spread the good word and come out to one of our shows, can’t wait to see you all!

5/31/16 Posting – The dates have yet to be announced but we now know this monster of a tour is happening. The legends of Scar Symmetry with be joining forces with Arsis, Shattered Sun, and Painted In Exile to sweep North America! You can find the flyer up above and the statement from Scar Symmetry guitarist Per Nilsson down below.

We’re stoked to announce our return: this September, we’re teaming up with Arsis, Shattered Sun and Painted In Exile for our very first North American headlining tour!

Dates and details will be announced later, but for now, CHEERS everyone, can’t wait to see you guys again, it’s been way to long!!! / Per Nilsson