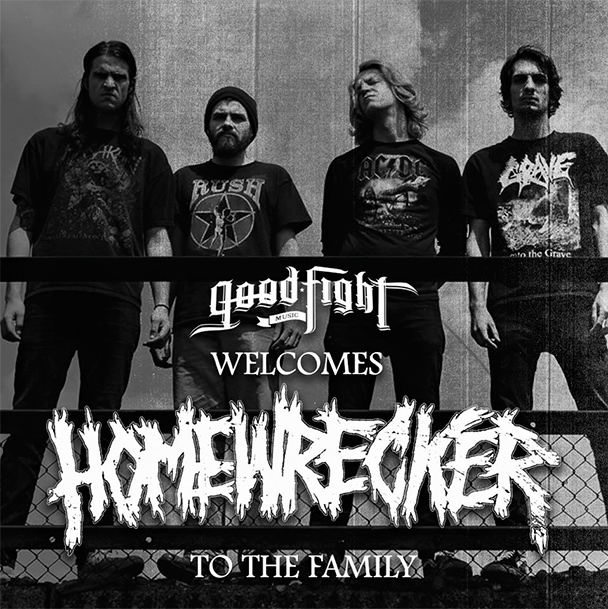 Homewrecker have just signed with Good Fight Music! Expect a brand new EP by the name of “Extinction By Design” this Fall! Here’s the official press release that was put out in regards to all of this:

Skating the line between brute-force hardcore punk and the evil death-thrash of old-school ’80s Slayer, the Ohio band has built its name over the past five years, releasing albums on A389 Recordings and touring with the likes of Integrity, Madball and Merauder.

New EP Extinction by Design is currently in the works and will be released this fall on Good Fight. The EP was recorded and mixed by Pete Grossman and Andy Nelson at Bricktop Recording (Harm’s Way, Eternal Sleep), and mastered by Brad Boatright (Nails, Full of Hell).

Guitarist Matt Barnum offers this statement about the signing: “Since the dawn of its existence Good Fight has succeeded in creating a great name and roster for itself. With the welcoming of Homewrecker to the family, we get to stand alongside many other greats. Thank you, Good Fight!”

Good Fight’s Rick Barnhart adds, “We’ve built this incarnation of Good Fight on ‘family.’ Almost all our bands are linked to each other in one way or another. When Joey from The Banner hit us up saying Homewrecker was looking for a new label, and knowing they already had relationships with most of our current bands, coupled with their sound and aesthetic, we knew right away they would be a perfect fit. Welcome, friends!”