We had previously brought up the game No Man’s Sky in regards to it’s unique, never ending soundtrack provided by the band 65daysofstatic. Now, shortly after the release of the highly anticipated game, there’s more reason to talk about it on this music related website…

In a recent interview with Metal Hammer Team Rock, it was unveiled that Motörhead Lemmy Kilmister (rest his metal soul) is featured in the game as an easter egg! Following the lead of a petition that popped up to name a new heavy metal “Lemmium” in honor of the legend, the element actually found its way onto the No Man’s Sky periodic table!

How did this happen? One of the game developers responsible for setting up the table turned out to be a metalhead and made sure the deed was done. The following is a snippet of what he had to say in regards to this. For the full quote, head over to Metal Hammer Team Rock.

Clearly the man’s music isn’t going anywhere anytime soon, but to have his name inscribed in the very annals of the science that’ll carry the human species ever further forward in history? That’d be pretty fucking cool. It’s not going to happen, but it would be cool.

I was a writer on the space exploration game No Man’s Sky earlier this year and, in amongst coming up with interactions in which you’re tricked into marriage with alien warriors or farted at by reptile traders, I also came up with a lot of the names of the minerals that the player mines on each planet.

It came to pass that during one of many (too many) nocturnal word-binges it was my job to come up with a bunch of these fake elements for gallant explorers to collect, trade and merge together. I was staring blankly at the wall, and Lemmium finally became reality. Well, ‘a’ reality anyway.

It’s a tiny Easter Egg really, but I like to think that metalheads the world give a little smile when it pops into their inventory. In the game, at least, Lemmium will forever be a permanent heavy metal fixture at the foot of the periodic table. A little slice of anarchy, deep in simulated space. 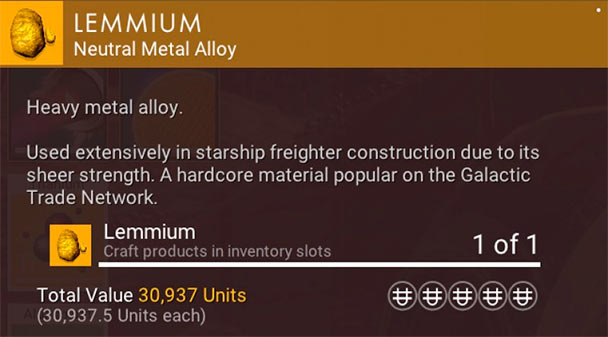