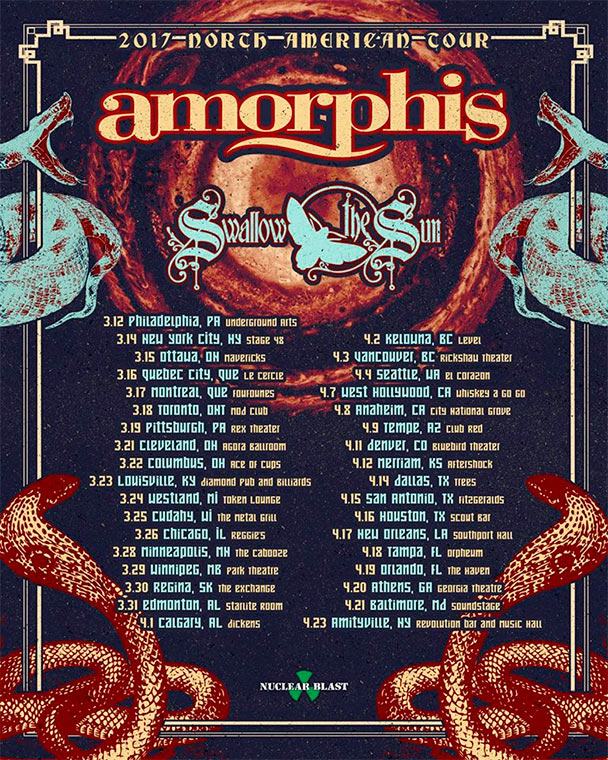 Amorphis and Swallow The Sun will be touring North America in 2017! The dates can be found on the flyer up above with music from the bands down below. The official statement from camp Amorphis can be found right here:

Ladies and gentlemen, we’ve got an announcement…

AMORPHIS to tour North America with SWALLOW THE SUN

The masters of melancholic progressive metal, Amorphis, will return to North America next March/April for a long overdue headlining tour. Support will come from fellow Finns and melodic doom/death merchants Swallow the Sun. The band will also appear on select dates with thrash legends Overkill and Egyptian themed technical death metal champions Nile.

“It’s been a long time since we toured in North America and Canada,” comments guitarist Esa Holopainen. “To be honest, way too long and at some point we thought we might never be back. In show business, things are not that simple and no matter how much AMORPHIS would like to tour, or play shows in different territories, usually it just doesn’t make sense.

‘Now it makes sense and we really wanted to make this to happen, after receiving so much positive feedback from US fans. As it has been quite a while since the US and Canadian fans have seen us, we will cover a lot of material from the latest AMORPHIS albums as well as play classics from Tales From The Thousand Lakes and Elegy, which were groundbreaking albums to us and many fans.

“It’s a great pleasure to have our country fellows SWALLOW THE SUN to join the tour as well. A great band. So there’s plenty of Finnish melancholy on stage and not that many major chords are going to be played. Still we arrive with happy hearts and will rock across US like never before. Shine on brothers and sisters!”