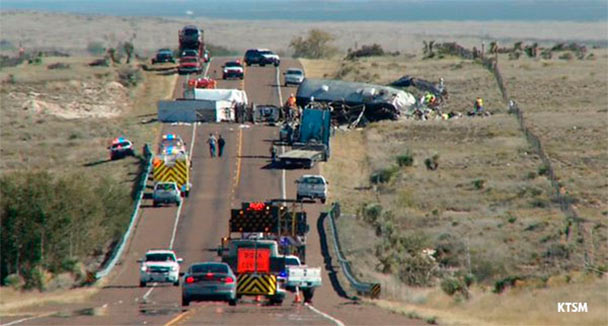 This past weekend marked one year since the fatal bus / semi crash that incapacitated The Ghost Inside. The band has been hard at work piecing themselves back together physically ever since to continue doing what they love. All things considered, they’ve shown a wonderfully positive and inspiring attitude through it the entire process. We have nothing but respect for these guys. For much more information on their recovery process, you can CLICK HERE.

Due to the occasion, the band’s frontman Jonathan Vigil penned a statement reflecting on everything that’s happened since last November. You can read over his words right here:

“It was a year ago today that an accident changed our lives forever. It’s been a whole year that we’ve had to deal with broken bones, amputated limbs, operating tables, hospital beds, psychiatrists and therapy. It’s been a long year that we’ve had to think of ourselves as the fortunate ones who lived, while our driver and the driver of the semi we collided with passed on. That means that it’s now been over a year since we played our last show together. And for me, that’s been the hardest part of coping with it all. I’ve (we’ve) been doing this for so long, that to stop in the way we have doesn’t sit right. I feel like I’ve lost my way. The psyche can want it bad enough but the physical limitations are still very real.

The impact that this has had on not only us, but the people around us is more than I can comprehend. Loved ones, close friends, other bands, people all over the music scene and fans all banded together to show their support in every way they could. From when some of us weren’t awake to realize it, to now even a year later.

I’ve had my ups and my many, many downs throughout this last year. I’ve battled back and forth a lot with the future. When The Ghost Inside started, we we all lived in LA. Now that we’re older, we all live across the entire country. Which means we are able to group chat, but aren’t able to see each other in person whenever we want. After something like this, I just need to be closer with the guys but I couldn’t. And that’s where this comes in.

The Ten of us were able to get together in September and celebrate being alive. It was the first time some of us had seen each other since the night before the accident. I can write things down to try explain the feeling of just being together again, but no words could ever capture what that felt like. Nothing I could say would ever rightfully express what that meant to me. As the saying goes ‘You don’t know what you have till it’s gone.’ Well in this situation, I didn’t know what we had until we were all together again.