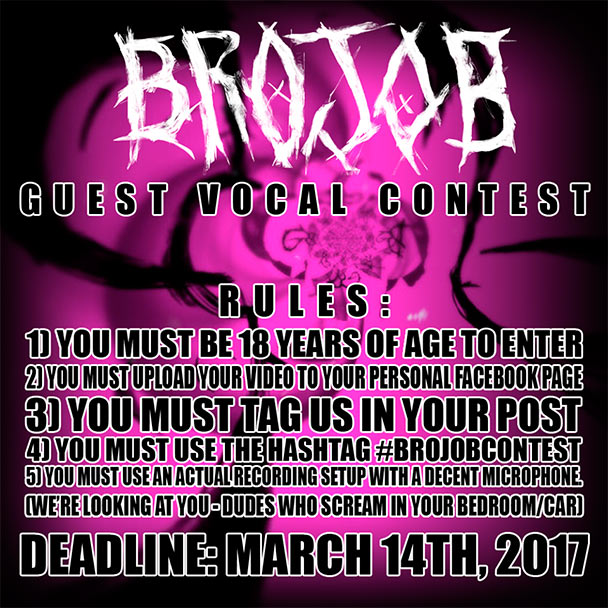 I’m sure a few of you have already discovered the over the top antics of Brojob. But for those who haven’t, allow us to make an introduction. Brojob are the pioneers of Gay Deathcore with a good dose of comedy on the side. They take all the bravado of Deathcore and mash it up with gay themes. So, in direct contrast to the crushing sound of the band’s music, their lyrics are all about romance and vivid descriptions of intercourse. It’s hilarious. This will likely either make people laugh or offend them.

The band is also bringing on a number of high profile cameos to push their sound. Names like Dickie Allen (Infant Annihilator), Jacob Wallace (Cerebral Harvest), and most recently confirmed CJ McMahon (Thy Art Is Murder) are getting involved.

And now, you can get involved too! The band just launched a contest to find guest vocalists for the upcoming album. Given the sudden popularity of the band, it’s a great way to get some exposure. Learn how to enter by reading the official rules right here:

HERE’S YOUR CHANCE TO BE ON OUR DEBUT ALBUM, ALONGSIDE SOME OF MODERN METAL’S BIGGEST NAMES. YOU WILL BE HEARD BY THOUSANDS OF LISTENERS WORLD-WIDE! SIMPLY DOWNLOAD THE LINK IN THE COMMENTS AND FOLLOW OUR GUIDELINES TO ENTER. TAG SOMEONE IF YOU THINK THEY HAVE WHAT IT TAKES!

Our friend Mac Soteros (Marky Mark Fights A Sharky Shark) had one of our favorite entries. Feel free to check that out along with all the Brojob tracks and even a video from CJ McMahon down below. Good luck!