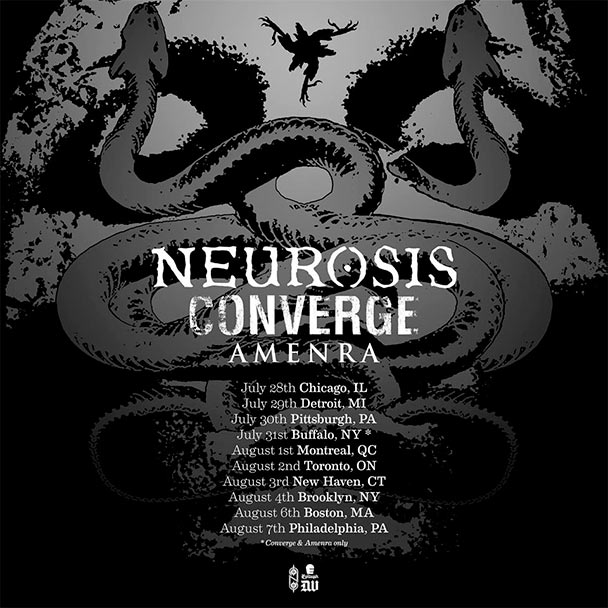 The titans of Neurosis and Converge will clash this Summer as they hit the North American road! In this venture, they’ll also be joined by the talents of Amera.

You can find the respective dates on the flyer up above. Music from all the bands and the official statement from Neurot Recordings can be found right here:

As the band continues to perform the works from their acclaimed eleventh studio album, Fires Within Fires, the upcoming tour will find NEUROSIS bringing their immersive live experience to the East Coast and Midwestern US, and Southeastern Canada. The tour will embark out of Chicago on July 28th, with shows in Detroit, Pittsburgh, Montreal, Toronto, New Haven, Brooklyn, Boston, and Philadelphia confirmed through August 7th. Iconic punk/metal experimenters Converge will supply direct support for NEUROSIS, and leading the charge will see Neurot labelmates Amenra making their long-awaited return to North American shores.

NEUROSIS is also confirmed to headline the Days Of Darkness festival in Baltimore, Maryland on October 28th and 29th, the two-day gala also including sets by Warning, Manilla Road, Elder, Gost, Unearthly Trance, Dälek, and Bongripper, and more. Additional NEUROSIS tour dates are to be expected.