Between The Buried And Me “Colors” 10th Anniversary Tour (Updated) 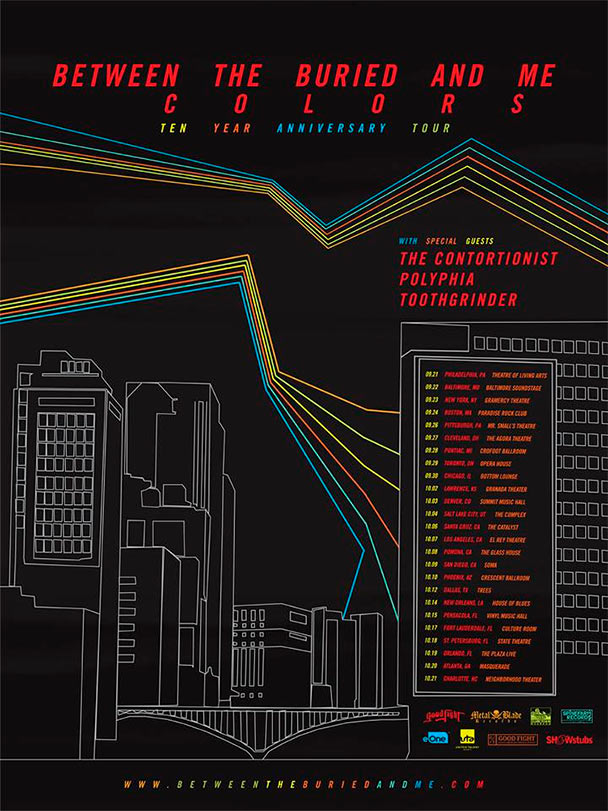 5/18/17 UPDATE – The tour dates have arrived! They can be found on the flyer up above. Better yet, The Contortionist, Polyphia, and Toothgrinder have all been announced as support! This is going to be an incredible series of shows with no shortage of talent to be found.

Here’s the band’s official statement in regards to this:

Colors was our statement of rebellion. We were challenging how others identified us in the context of heavy metal, and ultimately we were challenging how we identified ourselves. It was some kind of musical manifesto, in which we found new purpose and direction simply by throwing caution to the wind and purging every ounce of creative energy we had, regardless of how unhinged it may have seemed at the time.

Ten years has passed and we are lucky enough to be able to play this album from front to back on stage for our amazing fans. See you all soon!

ORIGINAL STORY – Can you believe it’s nearly been 10 years since the release of Between The Buried And Me’s “Colors”? The critically acclaimed LP first hit store shelves back on September 18, 2007. That being the case, there will be a celebration  nearly 6 months from now…

The band is currently planning a 10th anniversary “Colors” tour! The specifics have yet to be unveiled. However, this information was made known through Dan Briggs, BTBAM bassist. He talked about the band’s future touring plans while being interviewed by Josh Rundquist (The Drummer Guy).

You can scope this out just below. Also, of course, we’ve included “Colors” for your listening pleasure. Enjoy!