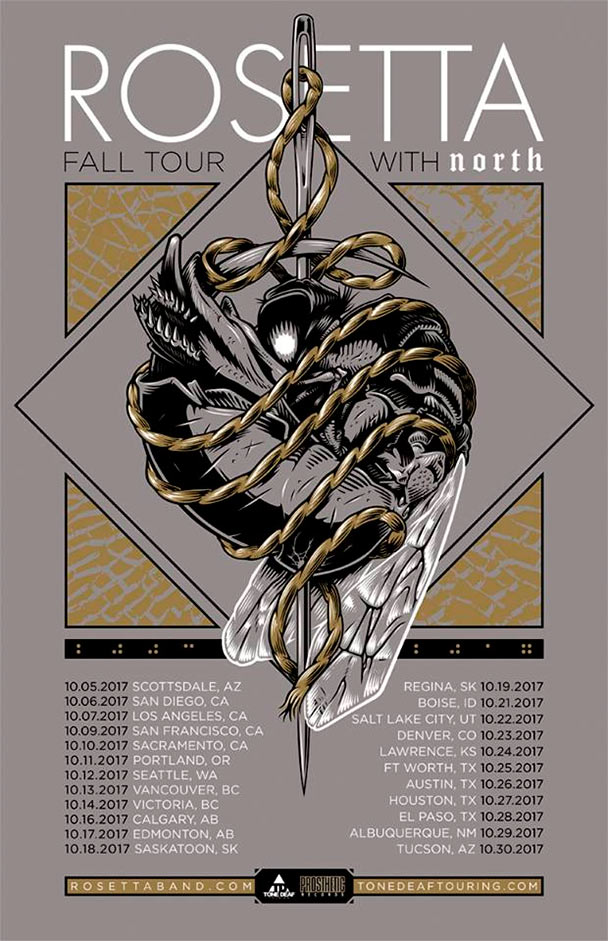 Rosetta and North are teaming up to tour North America! This will be running throughout October this year. You can catch all the dates provided on the flyer up above and hear music from both bands down below. Here’s the official statement in support of the upcoming trek:

Philadelphia avant-metal band Rosetta will embark on a headline North American tour this fall in support of their forthcoming, 6th studio album, Utopioid, which is due out on September 1st. The band will be supported by Tucson sludge act North. Tickets are on sale now; dates are listed below.

“We’re thrilled to play shows throughout the Western US and Canada this Fall, in support of our new album Utopioid. And we’re especially proud to be joined by our longtime friends in North, who we’ve had the pleasure to tour with several times over the years. Even beyond our brotherly kinship, they bring a level of inspired creativity to the stage night after night. For our part, we’re crafting a setlist pulling from the new album as well as many of our past releases, and look forward to connecting with old and new friends along the way. Can’t wait to see you out there.” – Rosetta

On their 6th studio album, Utopioid, Rosetta has unshackled themselves from past restraints and are further exploring their sound, pushing their music beyond the confines of what’s expected. The highly-anticipated album is a crushing hour long, intense journey that takes fans through a dynamic range of emotions while soaring to new creative heights.

“Composing Utopioid, we were wholly devoted to realizing the concept, disciplining ourselves to let the narrative shape all parts of the album — not just the lyrics, but everything down to the subtle ways rhythm or effects could alter the mood. We quickly let go of the imperative to write for live performance; although we will play many of these songs live, we felt freedom to explore the furthest reaches of our skills and imaginations.” – Eric Jernigan, guitar/vocals

“It’s the first album we’ve made where every single element, top to bottom, was created collaboratively — each of us has more of ourselves invested in this record than ever before.” – Matt Weed, guitar

Utopioid was engineered and mixed by Francisco Botero with assistance from Alexis Berthelot at Studio G, Brooklyn, NY, July-August 2017. The record was produced by Botero and Rosetta, mastered by Carl Saff with artwork by Jordan Butcher for Studio Workhorse.