Through The Eyes Of The Dead Announce Album / New Single

Metalsucks just debuted a brand new Through The Eyes of the Dead track! This is in conjunction with the band’s announcement of their first album in 7 years! Going by the name of “Disomus”, it will be released on October 13 through eOne / Good Fight Music. Pre-orders are currently available to those who CLICK HERE.

Through The Eyes Of The Dead have debuted a brand new single titled “Hate The Living” today, exclusively via Metalsucks. “We really poured our souls into this one,” says guitarist Justin Longshore. “The wait is over, All Hail The Disomus.” The new track comes from the band’s new LP, Disomus, which is scheduled to be released October 13, 2017 via Entertainment One Music (eOne) / Good Fight Music.

“We are extremely excited to get this record out to everyone,” adds bassist Jake Ososkie. “It was a lot of work getting this together and the final product is something that we think old fans and new fans will love.”

Disomus is the long anticipated follow up to their last LP, Skepsis, released in 2010. Disomus marks the second consecutive album with vocalist Danny Rodriguez and drummer Michael Ranne (a first in the group’s impressive history) together with longtime bassist Jake Ososkie and founding guitarist and songwriting engine Justin Longshore. Disomus doubles as the studio introduction of new guitarist Steven Funderburk (also of Wretched, Lillake) and the return of original vocalist Anthony Gunnells and his successor, Nate Johnson, via strong guest appearances, bringing Through The Eyes Of The Dead full circle.

Through The Eyes Of The Dead is also revealing the album art for Disomus today, created by longtime visual collaborator Paul Romano.

“Disomus” is the medical term describing an abnormal fetus with two bodies but one head. The album’s subject matter includes the tale of a man buried alive by a cult (“Obitual”), a dark magician’s creation of a malignant entity via sacrificial killing (“Haruspex”), underworld spirits doomed to roam the earth (“Dismal”), the Styx River of Greek myth (“Vortices in the Stygian Maelstrom”), the themes of the Alien/Prometheus film franchise (“Teras,” alternately named for an abnormal fetus with two heads and one body), and the real life tragedy and horror discovered by Rodriguez, a Chicago police officer, when called upon to check on the well being of an elderly person who lived alone (“Till Solace, She’ll Haunt”).

“Hate the Living” is not only the name of the first track on Through The Eyes Of The Dead’s first album in seven years, but part of a battle cry of sorts that has adorned the band’s t-shirts for years. The second half of the phrase is “Love the Dead.” Like the best of death metal’s past, present, and future, Through The Eyes Of The Dead is the kind of band that makes living with death worth loving. 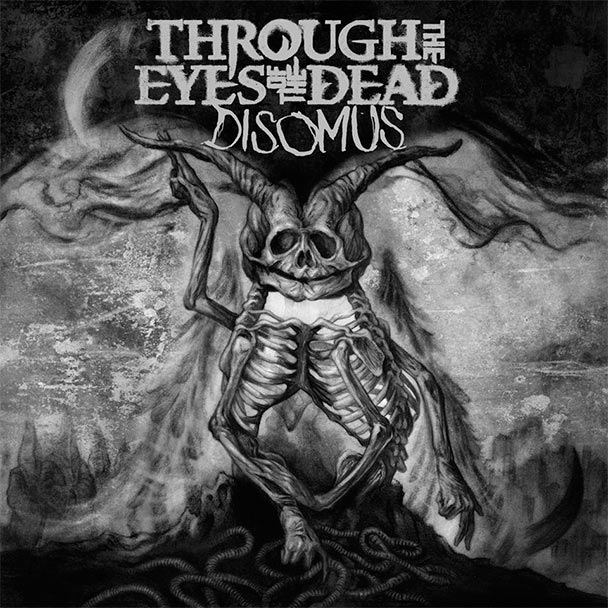