It would appear Behemoth are in trouble with their home country of Poland once again. This time around it’s for a merchandise design. The government believes the shirt disrespects the “White Eagle” symbol from the nation’s coat of arms. The band’s frontman Adam “Nergal” Darski had the following to say of this:

“So here I go again. On my way to the prosecutors office in Gdansk to be questioned as a suspect in “The republic of the unfaithful” case. Me and my partner in “crime” Maciek Manticore Gruszka is showing up too. Several individuals have been already questioned including heraldists who have made their statement clear: THIS IS NOT A POLISH EMBLEM. Apparently it’s not nuff for the decision makers in the court. Are they looking for a scapegoat?

Is this another attempt of the Polish government to convict Nergal and give an example for other artists? What’s the hidden message of those actions may I ask? “Do NOT fuck with us”? “Polish emblem as well as other religious symbols are meant to be untouchable”?, “art has its strict borders and thou shalt obey Nergal!”? Weird times, weird country, weird vibes… I do NOT feel safe and comfortable here I must admit but do I feel guilty? Fuck no.

I worship the reason and I’m a massive fan of logic therefore it is OBVIOUS that the eagle that has NO crown can NOT be a Polish emblem. Period. Sadly we have stopped selling shirts with this motive (but hey, it’s ALREADY the best selling shirt in our catalogue! huurraaay!) but what we r gonna do with fans who have tattooed “The republic of the unfaithful” on their back? Shall we arrest them? Peel the skin off? Cover it up?

These rhetorical questions I’m gonna leave unanswered here and go to do what I do best: piss stupid people off with sincere and honest art and I shall NEVER give up on my freedom to do so. “Do what Thou wilt shall be the whole of the law”! Enjoy your day folks!”

You can enjoy some Behemoth music below and support the band by heading over to their Merch Store. Here is the design in question: 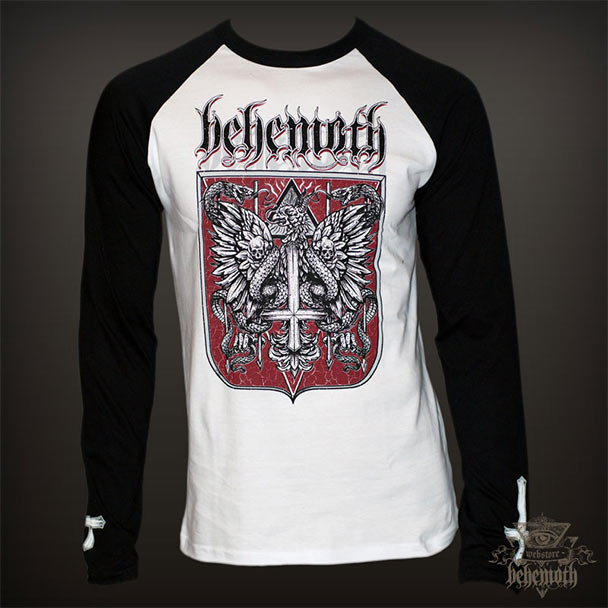