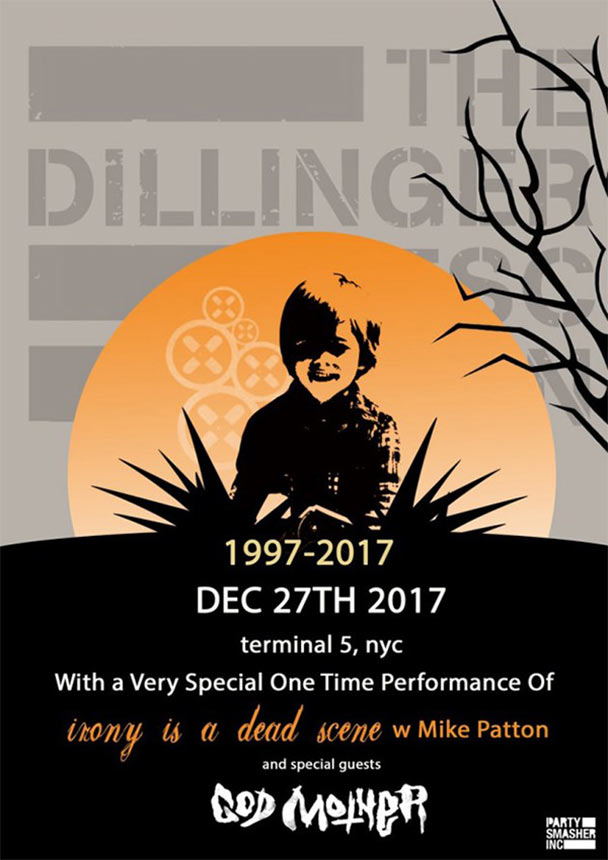 11/13/17 UPDATE – It’s been announced that at the December 27th set for the final series of TDEP shows, the band will be performing “Irony Is A Dead Scene” in its entirety along with Mike Patton (Faith No More, Mr. Bungle, etc). You can check the flyer up above and enjoy some music down below.

Original Story – It finally appears to be the end of the line for The Dillinger Escape Plan. The band announced their intentions to call it a day back in August last year. Since that point, they’ve been ferociously touring the globe, giving fans a last chance to see them live.

Now, TDEP have announced their final show. It will occur on Friday, December 29 at Terminal 5 in New York City. Tickets will go on sale this Friday. You can check the flyer for this up above. They’ll be playing alongside none other than Code Orange and Daughters for this final performance.

Frontman Greg Puciato had the following to say about this, “For me, in terms of shows, New York has always been one city on a short list of them, where every Dillinger show felt like a homecoming. Maybe it’s the proximity to New Jersey, maybe because we’re all East Coast natives, maybe for me it’s largely because it was the location of my first show with the band back in 2001, and maybe a lot of it is just the overall energy of the city itself. So many incredible shows, unforgettable memories on and offstage, and familiar faces both backstage and in the crowd. Add to that the fact that geographically its the one city that makes the most sense for anyone traveling from the east or west, or up the coast, and this was kind of a no-brainer from the beginning.”