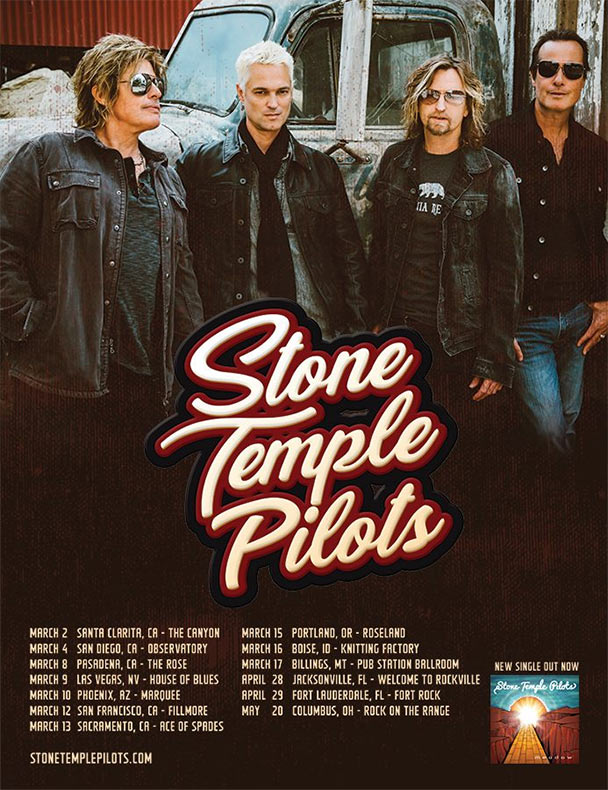 Stone Temple Pilots have announced a United States tour for March of next year. They’re also preparing an all new album. They will be doing this with a new singer in Jeff Gutt (ex-Dry Cell).

It’s been almost exactly two years since the passing of Scott Weiland. R.I.P.

While speaking to Billboard about this, guitarist Dean DeLeo had the following to say of the upcoming plans:

“If there wasn’t new music I don’t know that we’d really have a leg to stand on, but we’re sitting on 14 new songs right now. We wanted to have that ability to create new music and to go on and make more records and more music that we can just pile into the STP canon.”

“It goes from acoustic-based, beautiful things to really hard-hitting, heavy moments. We just have that ability to not be in one place, musically. So this record is just like any other STP record in that regard.”

“I felt like I was slighted with Scott. As great as he was, my entire life was two steps forward and three steps back. So I’ll tell you, it was a real pleasure to be able to write and record a record under these circumstances. It’s something I haven’t experienced in decades, so this feels great.”

You can check the dates up above.

The band has also released a new single with Jeff Gutt on vocals. It goes by the name of “Meadow” and you can check it out right here: