Today, we’re catching up with one of the more promising new groups to emerge in the Instrumental Progressive Metal / Rock scene. Introducing Retrosphere. Byron Hernandez & Seamus McDaniel are a completely DIY duo based out of Virginia. They handle every single element of their music and marketing directly from recording to final masters, graphic design to video. There’s a lot to be said for a work ethic such as this.

In 2018, they’ve launched their debut full-length album by the name of “In Motion” to follow up previous EP and single track efforts. It all came together very nicely with a lush and colorful sound that can be compared to the likes of Intervals and Sithu Aye (which says a lot in itself!). You can give the full album a listen through the YouTube link just below or head over to Bandcamp for streaming and / or purchase. Likewise, it’s available at all major online retailers and streaming platforms as you can find by CLICKING HERE. We’ll have a review for the LP on this site sometime soon as well.

As hinted, we had a chance to conduct an in-depth interview with these up and coming talents. You can learn quite a lot about Retrosphere, their approach to music, their independent drive, and their aspirations right here:

You recently came out with your debut album which sounds like it was a completely DIY effort. What was the greatest challenge in making that happen and what was your favorite part of the process?

The greatest challenge had to have been writing songs that we thought were original and enjoyable. We ran through quite a few ideas that ended up being scrapped because we didn’t feel like they would help us achieve our own musical voice on this first album. Our favorite part of the process was recording and producing the songs and hearing them actually come to life. We composed everything in Guitar Pro 6, and hearing the actual recordings after listening to solely MIDI during the writing process was a really rewarding feeling.

How do you feel about the response to the album so far and do you have any favorite tracks?

The responses we’ve gotten so far have been exciting. We weren’t really expecting a whole lot of buzz, but we’ve received some private emails and messages complimenting us and it’s inspired us to keep doing what we’re doing. Fast Forward is definitely our favorite track on the album. We think everything from the composition to the mix had a quality level much higher than the rest of the songs on the album, which is the reason why we put it first on the tracklist.

How did you guys meet and start making music together? Also, when did you start playing guitar?

Funny enough, we met in high school during AP Music Theory class. Byron was starting a band and asked Seamus and a few other guys to join. After several lineup changes, the dust cleared and it ended up as just the two of us a little over a year ago when we first started on the album. Seamus started playing guitar around eight years old and had played on and off until 13 when he got more serious about classical guitar. He played strictly classical from then up until a few years ago when he decided to return back to the band Byron had started in high school, as he had departed from it just a few months after it began. Byron started in sophomore year of high school when a few of his friends wanted to start a band.

How did you come up with the name Retrosphere and what does it mean to you?

We were basically looking for something that didn’t have a pre-existing meaning or connotation, the sole purpose of our band name was for us to give it a definition. After tossing some words around, we ended up with Retrosphere and it stuck. To us, the meaning of Retrosphere is all the hard work and time that we have put into the band and our music.

You’re self-produced. How did you get started down the production path? What gear and DAW do you currently use?

Byron had some previous experience with production from our first EP. From that we had a place to start with the mixing and mastering processes. We definitely had to step up it up in terms quality however, and spent a lot of time researching how to mix, experimenting with different plugins, and comparing our mixes to others. Eventually we wound up with a general mix that sounded great and we used it as a guideline to then further mix each song individually. We use Logic Pro X as our DAW, ran guitars and bass through a Line 6 POD HD Pro X, and used GetGood Drums as our digital kit. We also used Native Instruments’ Symphony Essentials for our orchestral parts and stock Logic plugins for MIDI and channel strip effects.

Do you have any future dream guitars or gear?

Byron: For me its definitely a Strandberg Boden Prog 7-string and Axe-Fx II XL+

Seamus: Because I already bought my dream electric guitar, the Ernie Ball Music Man Majesty, the next thing on my list is a Ramirez 1A classical guitar from a year before 1980 and also an Axe-Fx II XL+

This is a very generic question but it seems appropriate since you’re relatively new… What or who influences your music?

Our biggest influences are definitely Intervals, Polyphia, Plini, and Sithu Aye. They have so many specific qualities that make their music distinct, memorable, and enjoyable every time and we try to incorporate those same things into our own writing.

Relevant to the last question… If you could collaborate with any artist dead or alive, who would you pick? Doesn’t have to be a musician.

We think having guitar legend John Petrucci on a song for a guest solo would probably be the greatest honor we could ever ask for. Along with that though, if we had any of the aforementioned artists on for a guest solo, that would be just as amazing to us.

If you could have either a time machine or a spaceship that could take you anywhere, which would you choose?

Byron: I would take the spaceship for sure. In high school I was really into astronomy and astrophysics. Seeing different planets and solar systems is something I’ve always wanted to do.

Seamus: I’d have to go with a time machine. I’m big into sci-fi and technology and would love to see the technological advances of the near future, perhaps 50-100 years from now. I’d also take the opportunity to see where music is at and what became of Retrosphere.

What do you do for fun outside of music?

Byron: I usually hang out with my friends and watch shows in my free time.

Seamus: Both classical guitar and electric guitar take up a majority of my time, but I enjoy hanging out with my girlfriend and friends, playing retro video games, and doing the graphic design for Retrosphere.

Byron: My favorite movie is Interstellar, favorite show is Always Sunny in Philadelphia, and my favorite video game is Dark Souls I.

Seamus: Mutually agreeing with Byron, my favorite movie is also Interstellar and my favorite TV show is also Always Sunny. My favorite video game is definitely Pokémon Crystal, I’m still replaying it every so often to this day.

Do you have plans for a full line up in the future? Any live performances planned?

We’re looking for live members right now but aren’t trying to add anyone full-time just quite yet. We have already found someone to cover bass for us but are still on the hunt for a drummer. We’re being specific in looking for people whom we can really vibe with and hopefully incorporate as a permanent member at some point down the line. Recently we’ve been so caught up with production that we haven’t had much time to play many shows, but now with the album done and out, we’re going to try to play as much as possible during the spring and summertime to hopefully gain a larger local fanbase.

Any last words for the people?

Check out our album In Motion guys, we think there’s at least one track for everyone to enjoy on it. Thanks for taking time out of your day to read this interview and we hope you enjoyed everything we had to say. Follow us on Facebook, Instagram, and Twitter and visit our official website to find out more about us, feel free to contact us with any questions or comments. 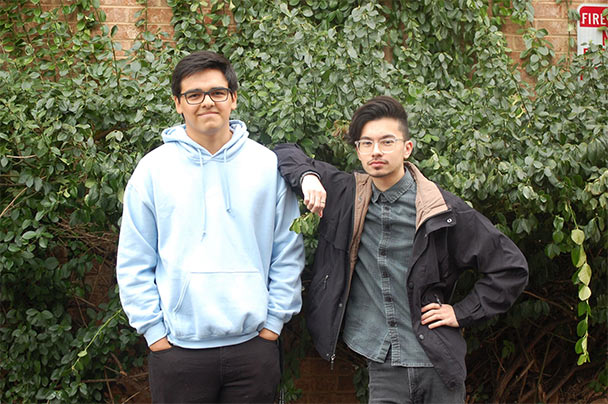