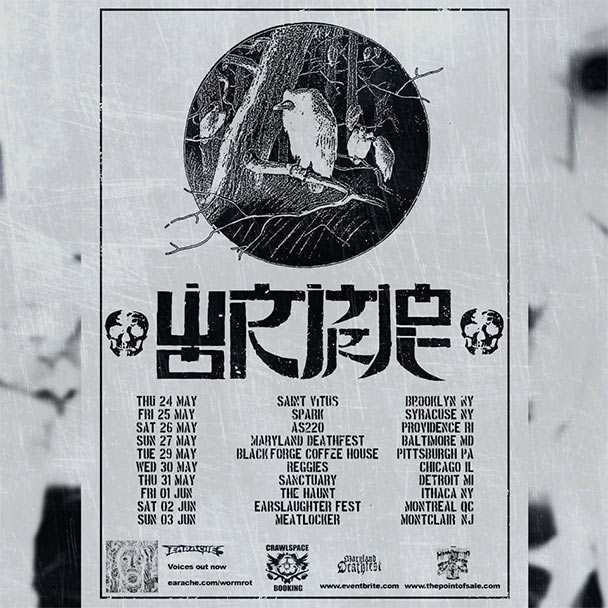 Wormrot’s difficulties in touring the United States appear to have continued. The Singapore based band made the following announcements about the latest predicament after finally making it into the country:

ANNOUNCEMENT (3pm): The boys are already on the way to US but without guitar, clothes, toiletries, some merch and some drum equipments. A friend of ours, Amir, who is travelling with them had been denied entry all because the luggages were checked in under his name by Etihad counter in Singapore and he was deemed suspicious by the US custom in trying to go into US to make money or work for the band when he is on tourist visa. I have settled the issues and Amir will be on the next available flight back to Singapore with no cost incurred but the luggages and equipments will be traveling back to Singapore with him. That is the biggest issue now as now the boys do not have anything with them and there’s no way Etihad can send the luggages to US. I am so utterly disappointed with Etihad right now. It is so traumatising for Amir to be treated like a criminal at the airport and it was so troublesome for me to spend hours communicating back and forth with Etihad, Amir, the travel agency as well as updating the tour manager on top of handling my little toddler who requires a lot of attention from me. I cannot even imagine how the boys will manage without clothes, main equipments and lesser merch means lesser income to support them for the tour

UPDATE (4pm): Etihad just contacted me to inform that they are trying their best to arrange for the boys’ luggages to reach NY by 25 May. Hoping for the best.

UPDATE (7pm): No news with regards to the arrangements of the luggages able to be sent to New York. Good news is, 5th luggage was identified as guitar which was under Rasyid’s name so guitar went through with Rasyid. However, guitar pedals, drum pedals, drumsticks, CDs, patches and clothes/toiletries were in the rest of the luggages still stuck in Abu Dhabi.

UPDATE (8pm): Tried to call the Etihad duty manager in Singapore airport office but didn’t answer. Amir is still stuck in Abu Dhabi with no updates of his flight details from Abu Dhabi office. Still no news of the baggages. Managed to get him….And now, the airline said that Amir had to buy his return air ticket back to SG and the baggages are still stuck at Abu Dhabi which they have to file for report upon arrival at JFK airport. I’m lost for words.

Updates: our dear friend Amir just got home in Singapore so he is safe. Our baggage will be on their way to us in a few hours hopefully. Mad props to those who settled our stuff and of course our dear Azean for hauling ass resolving this matter back home in Singapore. Not to mentioned the amazing support you guys were proposing to us due to the massive hiccups. The tour will go on with or without our shits. We have already made u guys waited for 7 years. See you folks soon. Saint vitus tonight. Come hang.