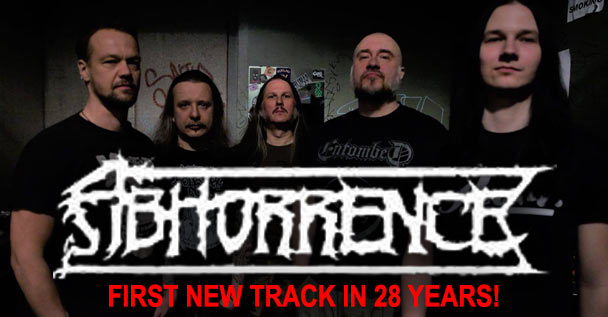 Great news! Abhorrence just launched their first new track in almost 30 years! It goes by the name of “Anthem for the Anthropocene” and is an absolute steamroller for the ears \m/

It would appear that the band has an all new release by the name of “Megalohydrothalassophobic” on the way! It’s set for release on September 14th through the good people over at Svart Records. For the record, that title stands for the fear of large things lurking underwater.

The rumours are true: underground death metal legends Abhorrence are back.

Svart Records is proud to present to you “Anthem for the Anthropocene,” the first track from Megalohydrothalassophobic, an all-new Abhorrence EP, all full of old-school Finnish death metal. The EP will be released by Svart Records on September 15th, and Decibel has premiered the new track. Hear Abhorrence’s “Anthem for the Anthropocene” in its entirety exclusively here.