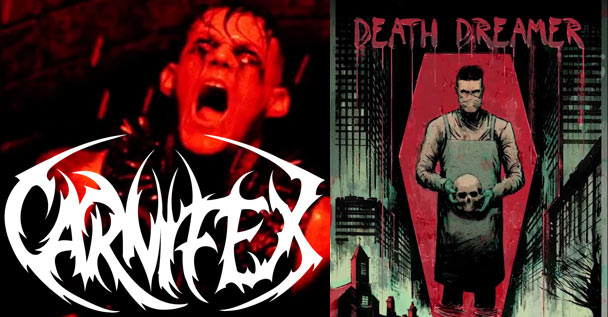 Carnifex vocalist Scott Ian Lewis is currently planning the release of a graphic novel called “Death Dreamer”. He’s hoping to do this with help from his fans through a crowdfunding campaign which can be seen by CLICKING HERE. So far, $4,597 of the $30,000 goal has been raised with a month left to go.

Scott himself had a lot to say of this:

‘Death Dreamer‘ is a world that’s lived in my head for years. First existing on that page as a television script and now it’s grown into a graphic novel brought to life by an incredibly talented team of artists. Christian, Simon, Taylor, and Chris have really elevated the characters in a truly amazing way. This book has been created completely independently, from writing the script on tour buses in eastern Europe to finding our amazing artist’s through Twitter.

Releasing the first edition directly in the hands of the fans that have supported me is something I couldn’t be more excited for. There is a lot of me in this story and throughout the characters. My hope is you connect with them in a way that pulls you deep into the dark world of ‘Death Dreamer‘.

He further stated on social media:

Hey everyone, Scott here. The last time I had the same feeling as today was right before the release of Slow Death. Excitement, anticipation and in all honesty, a lot of nerves. Death Dreamer is my 54 page graphic novel that I’ve been writing for nearly two years. Working on the script whenever I could. Tour busses, back stages, hotel rooms, it didn’t matter, I had to get the story out.

And now it’s so close to completion. There is no label, no publisher, no distribution. Just me asking you to help me finish what I started. Help me bring Death Dreamer into this cruel world. Hit my bio link to learn more about the story and to order. I can’t say thank you enough to everyone that has ordered already. You truly mean so much to me. Thank you. 🤘💀🤘- Scott Ian Lewis