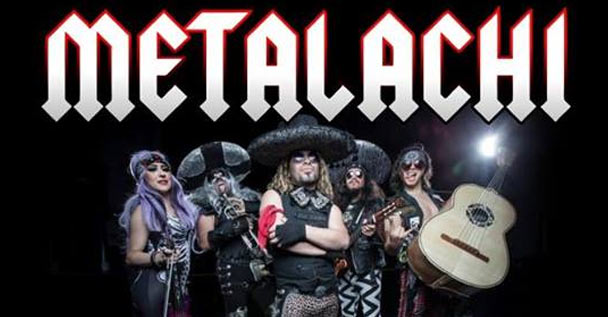 Did you know there’s a band with a sole purpose of turning famous metal songs into Mariachi music? Well, if you don’t know, now you know. They go by the name of Metalachi and they’re actually pretty damn entertaining. You can see this all play out through the various videos provided below.

Here’s a snippet of the official description for the band:

Hailing from Hollywood, CA via Juarez, Mexico, METALACHI is a musical/comedy stage show that somehow seamlessly blends the world of Spinal Tap and Cheech & Chong into an over-the-top stage spectacle. The band is comprised of a five-piece ensemble of classically trained mariachi musician siblings, that have been fused together with the power of heavy metal. Fans can expect an unlikely meshing of metal classics from artist such as Metallica, Slayer, Ozzy Osbourne and more with traditional mariachi standards from the likes of Vicente Fernandez and Mariachi Vargas de Tecalitlan… all played with traditional mariachi instrumentation but with a stage show that strays far from traditional!

METALACHI has garnered worldwide acclaim for their unique brand of raucous humor and innovative musical mastery, quickly amassing a loyal and diverse fan base of music lovers in addition to gaining praise from music royalty such as Dave Lombardo (Slayer), Vinnie Paul (Pantera, Hellyeah), Eric Wilson (Sublime), M. Shadows (Avenged Sevenfold), Billy Idol, and Howard Stern along the way (fun fact – for the past five years, Sublime has used METALACHI’s debut album Uno to time their set changes, blasting the entire album over the PA at their live shows).

It should also be noted that Metalachi will soon be heading out on tour across the United States! The dates can be found here:

See More: For The Laughs, Metalachi
« Chelsea Grin will “See You Soon”
Gojira’s “The Heaviest Matter Of The Universe”… With Banjos »