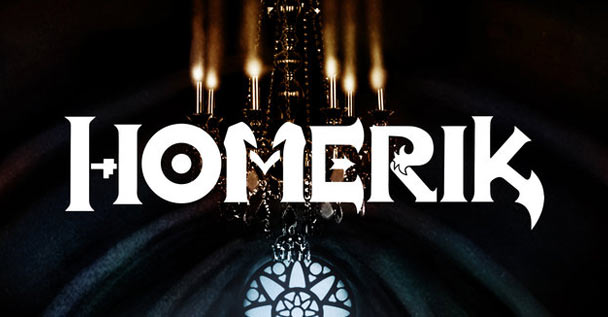 Kicking in the door from a parallel universe, Homerik strive to bring something truly different to the modern metal landscape. In a digital age, they’ve aimed to create something huge, organic, and ultimately original. If one were to box in these New York City based genre benders, they could probably label them somewhere along the lines of Symphonic / Progressive Death Metal. However, in reality, their approach transcends even a description as lengthy as that! In short, Homerik create a brand of metal music they can call their own. That in itself stands as a feat among the oceans of debut releases this world has seen.

This translates through their inaugural full-length record which is also a self-titled effort of mass proportions. The full run-time lands around 45+ minutes of eclectic, metallic based entertainment. However, the sheer amount of content packed into this record might as well render the length of this album as merely a number.

If you’d like to sink your teeth into this LP firsthand, there are a variety of options through which to do so. You can stream / purchase through Bandcamp, Spotify, Amazon, iTunes, Google Play, Tidal, Deezer, and more! It’s also worth visiting their Official Website. You can also enjoy the Homerik self-titled right here, right now by pressing that “play” button on the provided stream below. We also made sure to include their music video for “A Song of the Night: Part I” which is a real standout both thematically and in terms of execution.

The core line-up of Homerik is composed of four primary entities. They are musical director Kenneth Candelas (aka The Mad Composer of Pestilence), composer Cory Boyle (aka The Night Walker of Death), and the lyricists Andrew Petriske (aka The Daemon of Famine) and Obed Gonzalez (aka The Gatherer of War). They serve as the arrangers of this massive undertaking and serve at the head of all the collaborators that truly took part.

In reality, dozens of artists helped mold the creation of this album. As such, they appropriately describe the album as a “major collaborative effort by friends and colleagues in and around New York City.” All the primary metal instruments are present across the experience – guitar, drums, bass, and the human voice (in clean and harsh varieties). However, they also include tabla, taiko, a gong, violin, viola, cello, chimes, trombone, cornet, and the pipe organ from the Riverside Church in New York City… To be frank, that’s barely scratching the surface of the instrumental depth found here! The amount of talent that went into birthing this album is hard to wrap the head around. From purely an organizational standpoint, this is a masterwork.

This is an album quite unlike most for a myriad of reasons. It’s a monumental effort composed of many layers and seemingly infinite ideas. While certain songs may draw parallels to other contemporary metal acts, it would be nigh impossible to claim direct similarity for the band as a whole. This album takes some big chances but they’re all carefully calculated.

There’s definitely a bit of a learning curve or a point of entry to this album. First impressions may not be bright lights on the landscape of this record because it’s far from an ordinary listening experience. I know it took me a minute to process what was happening and once I got to that point, my enjoyment of the Homerik debut took off. I also saw this reflected in other commenters for the recent album stream which seemed to be a mix of taken aback and intrigued.

The Homerik debut is quite the story driven effort. This is abundantly clear from the very outset with “Into The Pits Of Oblivion” providing an initial setting that rumbles into “Unforgotten Kin”. The story line appears to shift throughout the album with every track approaching from a different angle, telling what appears to be a separate tale from a separate setting. From watching an interview with the band, it was also made apparent that a number of these tracks are dedicated to fallen friends. May Kennth Amadeus Batista, Konrad Duvall Cunningham, and Edward Nathan Nicolas rest in power. They were clearly loved.

There are a number of strong points pushing up the high water mark of this record. I named a few notables above but also really enjoyed the folksy joviality of “The Ire of Green”, the deadly darkness and tribal approach of “Wedingo”, the Spanish twists of “Bread and Circuses”, and that pipe organ with a premature sense of finality on “An Angel of Darkness”. As hinted, there also seemed to be a cultural approach to a number of these tracks – “Curse of the Black Nile” with an Egyptian theme and “The Balance of Power” with a Japanese theme would probably be some of the strongest examples despite different influences being strewn across the album. It kind of feels like a Homerik world tour at times. In all honesty, every track has its merits as the album literally transitions from the darkest pits to the peaks of levity. It’s quite a ride.

All of this praise is not to say the album is without a set of flaws… I personally have three primary qualms with this record. First is the harsh vocals. I love harsh vocals as much as the next metalhead but they’re easily the weakest link on this album and often sound out of place or in need of a rework on technique. This is immediately clear from the layering on “Unforgettable Kin”. Luckily, this is such a vocally diverse and impressive album otherwise – from the more operatic performances to even some Tuvan Throat Singing and well beyond! Second, is the sound quality. While I’m sure it’s a daunting task to record, mix, and master so many different inputs, it feels like it could’ve all translated more smoothly into the end product. That’s not to say it sounds bad. It could just sound better. Third and probably least importantly, the flow of the album seems disjointed. While I enjoy the variety and the leaps of faith between different tracks, it feels more like a collection than an album at times. This is fine in theory but it would be cool to see Homerik craft a grander narrative over a series of snapshots. I’d say those are the three main weaknesses on an otherwise brilliant debut record.

Despite any shortcomings, it bears saying that this band is very professional from head to toe for just initially putting themselves out there. They clearly considered every facet of their presentation carefully and it shows from the initial e-mail we received from them to the final output seen today. This should be applauded.

When the gavel falls, this is undeniably a great effort. I will say that in terms of ambition and potential, this is clearly only a beginning for Homerik. When stacked up against that monolith of their aspirations, I’d say they succeeded in some ways and failed in others and that’s okay. Failure is how we learn and grow. Homerik is currently trying to fill some massive, hand crafted shoes and I believe they can get there. I’m sure they learned a ridiculous amount making their debut album and will take that to make an even greater effort on the next go. So, I’d probably give this record somewhere around a 7 out of 10 when stacked up against that initial goal. In general, however, my enjoyment of this record probably landed somewhere between that initial 7 and an 8 out of 10. After I got over the initial hump, it was clear that there’s a great deal to enjoy and appreciate on this Homerik debut and it’s an adventure for the ears that I would recommend to any open minded metalhead willing to take a dive into new waters.

All that being said, metalheads should really be paying attention to whatever Homerik does next… The potential here is somewhat staggering! It’s rare that a new band establishes themselves so firmly in a seemingly all new approach and it would seem that the sky is the limit. Look up!

Once again, you can find this record through a variety of sources. Among them are Bandcamp, Spotify, Amazon, iTunes, Google Play, Tidal, and Deezer. You can also stream through the record by checking the links above.

If you wish to dig in further to the world and lore behind Homerik, their Official Website would be a great starting point. You can also discover more about the band and follow along with their work through Facebook, Twitter, and Instagram.