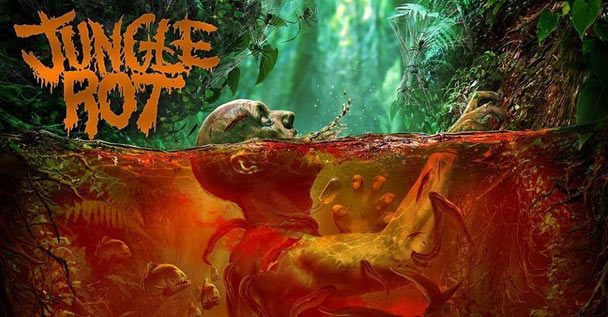 An all new Jungle Rot release is prepared to set foot onto the battlefield this Summer! It will be a self-titled record that marks the band’s 10th full-length effort. The official release will be on July 20th through Victory Records. Pre-orders are currently available to those who CLICK HERE.

In support of this, the band just launched an all new single “Fearmonger” featuring Schmier of Destruction. You can this a go right here:

In other Jungle Rot related news, the band will be heading out on tour with Havok and Extinction A.D. this Summer! You can find the dates for that by CLICKING HERE.

Here’s the official press release sent out from Victory Records in regards to this:

Maximum violence has been JUNGLE ROT‘s battle-cry since their inception and it’s proven again on ‘Fearmonger,’ the lead track from their tenth and most vicious album to date, the self-titled Jungle Rot, set for release on July 20, 2018. “Expect a beatdown if you aren’t prepared,” promises bassist James Genenz. As the album hits shelves, JUNGLE ROT will hammer audiences as they return to the road with Havok and Extinction AD starting July 23 in St. Paul, MN.

‘Fearmonger,’ features Destruction vocalist/bassist Schmier lending his shrieking throat as JUNGLE ROT vocalist/guitarist Dave Matrise lays down a counter-guttural growl lower than Dante’s Gates of Hell. Matrise explains the songs origin: “We covered the Destruction classic ‘Invincible Force’ some years ago and Schmier told me ours is his favorite Destruction cover he has ever heard from any band. Years later we toured together and right away Schmier approached me to start singing the song with him in concert. His trademark style and my vocals worked so well together that when I began writing this new record, the idea immediately came up to have him as a guest vocalist. He loved it and was honored to be a part of it. That’s how we created ‘Fearmonger.’

In January 2018 JUNGLE ROT entered Belle City Sound with engineer Chris Djuricic behind the board. Mixing and mastering was done by the legendary Dan Swanö (Dark Funeral, Marduk). Jaded death metal purists looking for fresh kills need to add Jungle Rot to their must-listen list. The album blasts off with ‘Send Forth Oblivion,’ an audible equivalent to stainless steel medical devices in your eardrum. Another track, ‘Glory For The Fallen,’ shows Genenz pounding away at his woofer as he explains the track was written for his close friend Jeff, who was murdered in 2017. “I definitely needed to put something on the album for my fallen brother, and another track directed at the cowardly scumbag who took his young life, which is ‘Pumped Full Of Lead.’ I’ve had a lot of pain to write with, so that is my message – life is pain.” Jungle Rot closes with a crushing cover of Kreator’s 1987 classic ‘Terrible Certainty.’ “I love this song and it’s one I’ve always wanted to cover. I remember seeing them for the first time, saying to myself I want to start a band,” Matrise confesses.

As the hype surrounding JUNGLE ROT points that this is their most dynamic and diverse release to date, Matrise states the band has never measured their success by tailgating other acts. “We are JUNGLE ROT. This is Jungle Rot. Bands may want to call it a day, hang up their axes and go to bed, that is their call, but that is of no consequence to us or our plotted course. By the early 1990’s, the death metal revolution was ready to overthrow the stagnant metal scene and 20+ years later, our job has not changed.”

Delivering what could be the most ambitious drumming of the year is long-time JUNGLE ROT skin-thrasher Jesse Beahler. The cover art for Jungle Rot was again helmed by the masterful and brutal mind of artist Gyula Havancsak.