Machines of Man is the Prog band you need in your life! 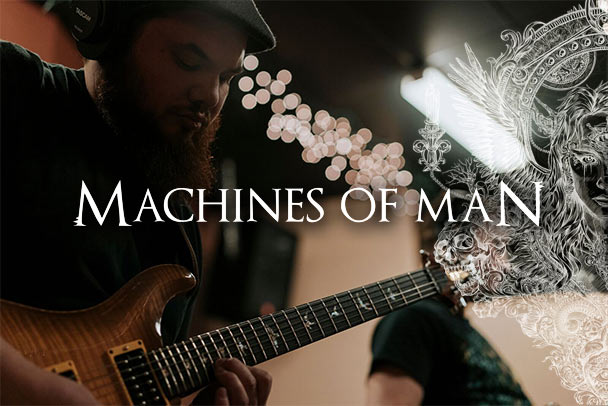 If one were to describe Machines of Man with a single word, “impressive” would surely be a great candidate. This is a five-piece band making a huge sound from their base in Salt Lake City, Utah! Their approach to music can essentially be boiled down to technically proficient Progressive Metal. However, in reality, there’s too much creativity to box in here so it’s definitely recommend you just let these musical fireworks go off inside your ears!

This year saw the release of a damned magnificent LP from the band known as “Dreamstates”. It’s anything but sleep inducing with over a half hour’s worth of quality content of varying intensities. The entire album package is sewn together between 7 tracks – all of which are fully worth experiencing… So get on it! This listening experience could be recommended to the prog heads of this world without any hesitation. In short, this band is the real deal.

Today marks a number of special events for Machines of Man! For starters, they’ve just released the instrumental version of “Dreamstates” to let the compositional fanatics drink deeply of the lush soundscapes. Secondly, they’ve released an incredible live performance video of the band doing what they do best. More specifically, it’s a full band playthrough for the track “I am the Colossus”. This was filmed at Man vs. Music. If this video doesn’t prove that these men are truly machines, I’m not sure what will. Very, very impressive.

All the music is currently available in several formats at the band’s official merch store. You can actually get all the links and much more information by visiting the official Machines of Man website. As per usual, we’ve also included the media links for your enjoyment below.

Of course, you can also buy the album! Once, again here’s the official website link.

Here are the relevant credits:

Machines of Man is:

Written, Produced, and Performed by Machines of Man
Drum Tracking by Greg Shaw at Man vs. Music
Mixed and Mastered by Jamie King at The Basement
Artwork by Juan Orozco

“I am the Colossus” Live at Man vs. Music

Recorded Live at Man vs. Music by Michael Sasich
Filmed and Edited by Big American Story
Audio Editing by Jonathan Ramanujam
Mixed and Mastered by Jamie King at The Basement Studio