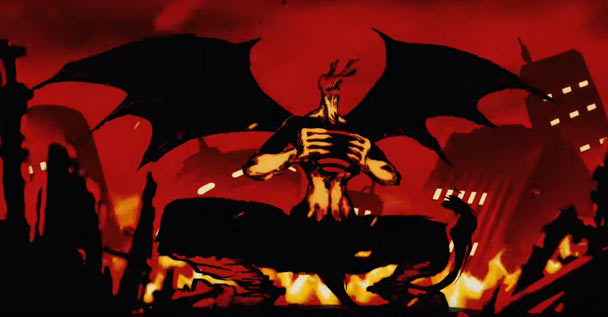 A new Ramen Noodles commercial from Japan has gone a bit viral. Impressive animation aside, it has a completely unexpected metal twist! This comes strapped with quite a strange and lengthy backstory. We roughly translated the Japanese description for you and placed it underneath the video itself, which can be seen here:

The following is an explanation by monthly mu:

1. Prospective image If the complete creator made the world, why is this world being evil and greedy …. I can not answer that question easily, but one thing I can say is that the world is exercising, by being imperfect, with evil and greed, it is being let down. Here, there is an impressive picture. The image that reminiscent of a series of rituals “Akuma Kimura” shows the desire to be perfect and the missing emergence due to it. It’s not simply that something like a devil appears. Indeed “depiction” which is called “Akuma” = devilishly strikes the reality that the devil’s thing is alive (and can not be destroyed) on the inside of the human being. If “acts of eating” and “living” is fundamentally a virtue, what kind of darkness should we bear?

2. In the middle of the ancient bird statue and the mystery ritual image, the phrase “tasty, very tasty” has been repeated many times over and over. That makes it clear that the word has lost its meaning and became a spell that appeals only to subconscious. And “Immediately tasty, very tasty” is replaced with “Hell delicious”. In other words, the two words act as seamlessly as shaking consciousness by making it different character string, and what you see seems unaware, it becomes a resident of the world where taste and hell live together. Although it is necessary to repeat detailed verification, it is necessary to feel someone’s intention also in depiction structured in multiple layers in the image. “Hiyoko” cooks “chicken noodles”. However, without putting in hot water, the chick first dedicates chicken noodles in front of the gods of multiple limbs reminiscent of the ancient bird god. At the harvest festival of ancient and east west, crops are to be dedicated first to God … …. It is the transfiguration of the chick itself that begins with this dedication before “Ikeda”. A chick that is a symbol of immaturity, childhood and possibilities will rapidly grow to a cock to receive Tosaka like a flame. Although it is a demonic appearance, the leap to adults will be satisfied with the craving for integrity as mentioned at the beginning. It is symbolic and concrete.

3. Although it is a digression aside called Kaimu, the (devilish) appearance of the demon that the chick has transformed imagines the demonic called Kaim (Camio), which is demonized by the demon of Solomon 72 in demonology. Its appearance is familiar in Japan as well as a bird-like figure with saber (painting by M L Breton) drawn in Colin de Plany’s “Dictionary of Hell”. It is a Kime that is said to be “in the burning ash” in the same book, but the chick coincides with the bright red Tosaka and the hot fire ball (sun), together with the explosion. Kime also understands the sounds of animals and nature, is also noted in the classic as a wise man who knows the future and tells it. If the chick’s devil is a demonic entity inheriting the symbol of Kime or Kime, the act of converting chicken noodles into “hell delicious” in a series of rituals can not be just a thought or violence. It will be the magic of seeing change – devil fusion led from it.

4. The demonic entity that turned into a devilish existence, the chick truth, the chick moved, breaks something sealed and fuses it with chicken noodles. In addition, the chick who turned into a demonic entity accepts eggs that leap to the heaven and make the reminiscent of the sun (fire). Then pour hot water (water) while descending. Iconographically, “fire” is represented by an upward triangle, rising motion, “water” by downward triangle, downward motion. Symbols combining upper and lower triangles symbolize the union of Yin and the order of the universe. Here, please remember the scene of the former stage. A chic with a devilish presence adds different elements to the completed order. Up to now, chicken chicken noodles that only eggs have been injected face up. Incidentally, the symbols that combine the upper and lower triangles are hexsagrams, hexagonal stars. The alias is “Solomon’s emblem” after the soldier Solbon of ancient Israel. Again surprising that the magician Solomon is implied can not be forbidden.

5. A new world born from bowls A demonic enthusiast chick who can get rid of the darkness with the wings of the black jet made a birth of a new world from the bowl. Is creation made with explosive flame as a challenge to God …… This is the forbidden, fusion and coalescence magic inherently. It has a capability due to a heteromorphism, sometimes seen as a whites because of heresy. As the witch who leads to medicine and medicine in the Middle Ages was heresyed, the brand “not ordinary” that has received the cultural authority of the age, academism, that is, what is trying to get out of general common sense is heavy. Originally we can not help thinking of the chicken ramen chicken from the chick adult body side and the “secret chicken at home chicken” episode in the development secret story of chicken ramen, but this is not true I will not mention it.

Here, “Hell delicious” made by devil ‘s fusion magic = Akuma’ s Kimmler was completed through a forbidden secret that houses elements of nature. In retrospect, the devil also refers to the pagan god. The above-mentioned Kaim is also originally a pagan angel, and it has existed to bring new knowledge to the earth. Akuma’s horny that Akuma’s Kimura brings is not a propagation by an angel or a god who changed her appearance. Fusion also leads to chaos, but harmony beyond that fosters growth, evolution. By receiving Kimura ‘s revelation, our table can be further evolved. Nissin is trying to add forbidden arcaney to chicken noodles, which can be said to be creator of enterprise products, and corporate entities. Are you going to change the part of food culture from the bottom?

Only those who break a forbidden bag and got a wing that can be caught in the sky can taste the end. Later on, when looking back on the history of chicken noodles, the posterity point will point to Akuma’s Kimura and say: That was a great omen. Noodles.