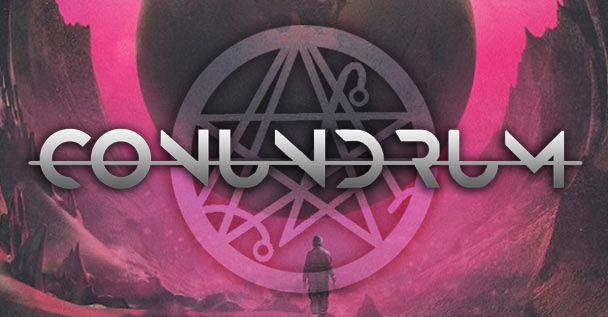 There’s quite the promising Progressive Metal band on the rise from Green Bay, Wisconsin. They may be called Conundrum but I doubt fans of this particular musical approach will have much problem listening to their music. There’s a wealth of talent and promise to be found here so it’s recommended you give them a go.

Originally known as Second To Fall, they went to work around 2010 before opting to make a transition down the line. They re-emerged under the name of Conundrum in 2014 with a Death Metal, extra-terrestrial theme which they’ve strayed away from since. The band recently launched a new album by the name of “Perihelion Mvt. 1” which marks the first definitive steps in that different direction. They’ve kept the science fiction theme to a point but, as hinted, now they’re now making some high end Progressive Metal music with no shortage of twists within itself. They’ve come to push the boundaries of their band, exploring beyond previous musical limits and it has yielded some pretty great results.

If you’d like to dig in for yourself, you may do so by checking out one of the streams provided below. There’s a full animated album video and you can also add the music to your collection by finding it on platforms such as Bandcamp.

The full album is constructed from the combination of 6 tracks. Every number brings something worthwhile to the table across the record’s varied depths. The flow of the album will take the listener through some very different soundscapes. This is made apparent from the very first tracks.

“Saros Cycle” makes for a grandiose and beautiful instrumental opener. It takes the listener’s ears under its wing for a trip up and down cascading levels of sound and varying levels of the heavy. From start to finish, this track is oh so tasty! The songwriting and control of tension here are just sublime. It had also served as the album single some time back but still remains fresh as a first listen today. Well done, Condundrum. Well done.

This is followed up by a track called “Flicker”. This is somewhat of an appropriate title as this track leads to some choppier delivery and also features the album’s very first vocal delivery by the man with three names, Dillon James Hare (who’s no longer with the band). This number takes the listeners through various twists and turns via the prog exercises put forth. Some of the most hectic moments of the LP land on this track, providing further contrast to the opening number. The opening two tracks are a bit like day and night. Both are enjoyable for largely different reasons. There are some very nice musical ideas coming into play on this one before it all comes to an ethereal ending.

This then explodes into track #3 “Dissimulation” which has some of my favorite chord progressions on the record with wide sweeping soundscapes after a bit of a violent opening. There are some truly nice, technical grooves breaking the flow of this track – especially on the latter half. Next up, we have “Seraph”. This one opens with some truly majestic riffs giving an almost otherworldly vibe. The track also features some very progressive feeling keyboard work which isn’t necessarily a common trait on the album.

Between “Immerse” and “Jet Propulsion”, I have to say the end of the album boasts some of its loveliest and most immersive (for lack of a better word) moments. “Jet Propulsion” actually serves as another instrumental number, allowing the album to begin and end with pure musical expression. There are some truly breathtaking moments strewn between these tracks making me question which half of the album I enjoy more!

One of the key words that springs to mind while listening to Conundrum is “potential”. The instrumental corps of the band is stacked with talent and a whole bounty of compelling musical ideas. I don’t believe they’ve come anywhere near the peak of their capabilities and it should be great to see them evolve as a singular unit moving forward. Beware!

Not to ham it up but, from a personal standpoint, I must say I’m very proud of the work that Cody Stonebrook has put in. He’s been putting out a lot of material through different projects for a while now and has always been an excellent musician and songwriter so it’s very nice to see it shine on this new plateau. Very stoked he found a group of talented, like-minded musicians that complement each other so nicely.

Speaking of which, the band is currently composed of two other members. Guitarist Nate Martin in cahoots with Cody when it comes to bringing together awesome melodies & far out composition. Drummer Garrett Aiken proves to be an absolute machine behind the kit, holding down the tempo with some nice embellishments to boot. The band’s recent vocalist recently parted ways with the line-up and there doesn’t appear to be a current full-time bassist despite a recent video surfacing of a very nice bass recording for “Perihelion Mvt. 2”!

I have to say the weakest link in this recording appears to be the vocals. The instrumental corps is clearly very tight, complimenting each other’s sound from the very first track but the vox don’t always settle in nicely with the rest of the mix and can be a bit grating, even in the way at times. This is apparent from the first track they appear on. For example, the high screams at the 1:50ish mark on “Flicker”. For this reason, I personally prefer the instrumental version of “Perihelion Mvt. 1” much more.

Though, as just hinted, the band is currently seeking a new vocalist so there’s a chance this end of things will improve dramatically moving forward. It would be nice to see Conundrum paired with a frontman capable of both a wide range of harsh and clean vocals. It would likely compliment their sound very well as opposed to the seemingly one dimensional harsh vocals put forth on “Perihelion Mvt. 1”. This is a highly talented group of musicians and a diverse vocalist could really push their sound to a whole new level.

Vocals aside, the rest of this album sounds very sharp on the production front with the music itself settling very well in the ears. Certain moments are especially fantastic. For example, I found myself replaying later moments of “Flicker” repeatedly and have listened to “Saros Cycle” with some frequency for months now. Not to mention the second half of this album. There’s just a nice sound all around here.

In the end, this first movement has certainly left my ears wanting a second (which listeners shall receive! Huzzah!). It’s a fantastically composed and intriguing album that serves as a testament to an upcoming band worthy of keeping tabs on. There’s a good bit of room for growth but that’s certainly a good thing in this situation. On just the musical side of things, I’d probably give this album an 8 out of 10. Unfortunately, the full album experience is held back a bit by the vocals and would land it closer to a 7. But in terms of entertainment itself, I’m going to give this one an 8 anyways because there’s a good bit to enjoy here and the effort clearly shows. So, once again… Well done, Condundrum. Well done.

Give this one a listen! To reiterate, you can also enjoy all the music of “Perihelion Mvt. 1” through the streams provided up above. You can also grab the album itself on platforms such as Bandcamp.

I keep speaking on the potential going into “Perihelion Mvt. 2” so it’s also recommended you give Conundrum a follow on Facebook and Instagram. They’ve been posting up teaser videos of what’s coming next and, so far, it’s sounding so good! Keep up!

The band also has a number of live shows coming up if you’re interested / able to see them around the Wisconsin / Minnesota area. On July 15th, they’ll be playing alongside Volumes, Rings of Saturn, Spite, and Cross Your Fingers at The Cabooze in Minneapolis, Minnesota. They’ll be joining Our Common Collapse, The Atlantis Theorem, Tied To Tides, and Within Waves on July 26th at The Garage in Burnsvilee Minnesota. Finally, they’ll be playing the Northern Wisconsin Metalfest on September 13th. More information on all these events can be found on the Conundrum Facebook page.