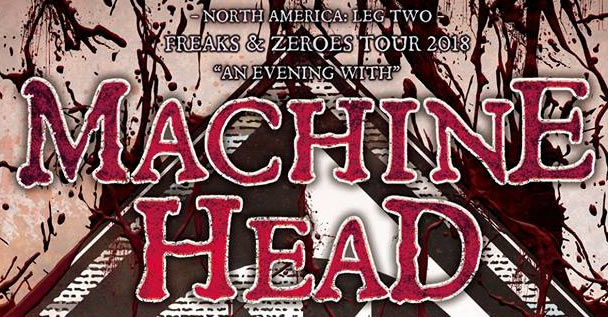 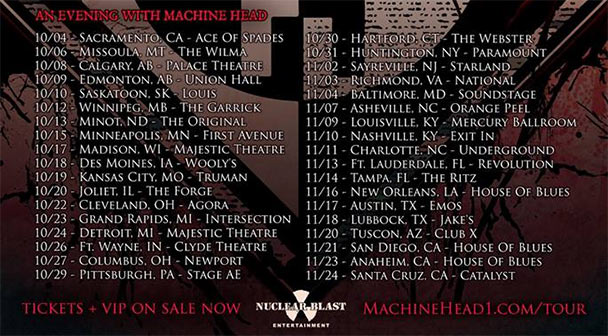 Good news for the gear heads! Machine Head just announced a full North American tour for this year! Check the dates if you’re interested in attending.

The band’s frontman Robb Flynn had the following to say of this:

“We’re really stoked to be hitting the road in the states and our cannabis legalizing brothers up in Canada again. After the first tour in support of Catharsis hitting typical Machine Head strongholds like Chicago, Denver and Oakland, we’ve been really looking forward to doing a 2nd North American run that hits all the nooks and crannies of America, places that a lot of time get left off a traditional tour routing as they are smaller markets, and maybe route way off the the main highways that run through the states.

I’m excited as fuck to get back to places like Missoula, Montana, Minot, North Dakota, Ft Wayne, Nashville, Lubbock Texas, Asheville, North Carolina…we were blown away by theses cities on the last ‘Evening With’ cycle…these places were INSANE, the fans are hungry for aggressive music, they come out and go crazy, get loose, get free, and that’s what were all about!

Central Canada will be a rager! Cant wait to get back there and I’m actually bringing the gloves and lube for the Canadian border this time, free of charge!

And as a sense of pride I’m definitely looking forward to making up the 6 shows we had to cancel back in February.

I tell you what man… that last show in Pittsburgh… it was one of the roughest shows of my life. It’s one of the most helpless feelings in the world, losing your voice onstage. There’s no ‘powering through it’, there no ‘manning up’, and while I hardly consider myself the most manly-man out there, I hold myself to an impossibly high standard when it comes to performing. I want to fucking crush it every night, I want to blow people away every night. And when I can’t, it really is a feeling of complete powerlessness.

That goddamn viral bronchitis lasted 7 weeks! It kicked my ass! But that shit is gone now, and we’re ready to kick ass again, so Head Cases of North America, I ask you…are you ready? ARE YOU READY?! Cause we’re ready to rage!!!”