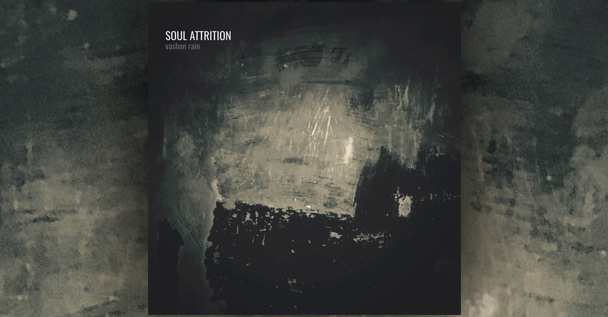 Soul Attrition is a very personal project with an appropriate title. One of the main themes surrounding the music is how society and life itself can wear down a man despite his persistence into the night. This Chicago-based one man band is the brainchild of the multi-talented Josh Parlette who also functions in the sludge / noise band Escape Is Not Freedom (CLICK HERE if you’d like to give them a listen as well!).

“Vashon Rain” is the title of his first full-length project under this moniker. There are many great sounds that are finely crafted to come crashing together through this listening experience. Among them are Grunge, Post-Metal, Sludge Metal, Prog, and Alternative Rock. He constructed this album through the deep freeze of a Chicago winter and it reflects through the cold in the music itself.

The Soul Attrition debut just came out today and is currently available for purchase and streaming over on Bandcamp. This independent release can be enjoyed from front to back right here:

There’s a definite bleak coloring to this music. I recently described the lead single “Fatal Flaw” as a place where “you can find a haunting air of doom rolling over ears like churning black storm clouds”. After listening to the whole project, it really feels like stepping into waves of gray from which one may never come back. This record stands against a deep ocean of sadness and deterioration that almost seems to be a direct reflection of the human condition.

“Vashon Rain” opens with a nice crunch on the track “Sinking”. This introductory riff then gives way to the introduction of Josh Parlette’s voice and smooth changes in musical progression. The level of focus and attention to simple, yet effective, songwriting is immediately put on display. Around the halfway mark, the track dramatically flips into some nice grooves, showing the teeth of this album. This is all before launching into the record’s first guitar solo which isn’t exactly made from fireworks but certainly adds to the tone. All in all, this track wraps together several of the key elements found on the album and serves just as an introductory track should in that context.

“Thirteen” comes crashing in with near dystopian riffs and varied, dark vocals to match. Once again, the track flips at a point which seems to be a keystone of the Soul Attrition writing technique – one I actually enjoy quite a bit. The possessive, suffocating nature on the second half of this track is among the moments that really stuck in my head after the fact.

This fades into “Remission” with a nice, picking pattern which is soon joined by one of the stand out bass moments on the record. The intensity of this builds with some emotion packed lyrics until it reaches a fever pitch on the first chorus. The evolution on this number is really quite nice despite the downcast feelings. Following the second chorus, for example, an eerily resonant lead leaps up over the soundscape before returning to near silence akin to the beginning of the track in order to carry things away…

“Fatal Flaw” served as the suitable album single and is a good track for a number of reasons. Similar to the opener “Sinking”, it’s a notable representative of what to expect on “Vashon Rain”. As I had stated on the track review last month, it brings a certain melancholy but, ultimately, realistic look on the nature of human existence. This shifts through a few different, darkened soundscapes before opening up into a wrenching tremolo towards the end which has grown to be one of my favorite moments on the record.

The title track itself serves as a nice palette cleanser. It hammers a number of notes on the acoustic guitar to make for a nice, yet equally bleak, progression to compliment the records overall approach.

This leads into “Unexpected Affront” which starts off with simple chords before weaving into some notable guitar work and eventually hitting a drum groove. Walls of distortion come crashing in shortly before the two minute mark, standing as one of the most epic moments on the album. This only grows in intensity towards the second half of the track, bringing out some of the most exciting drum work on the record before melting back into an open chord filled sonic space and one of the better guitar solos on the album.

“Euclid” might be one of my favorite tracks on this release because it takes a slight turn away from the minor sound the rest of the record holds with a rather lovely, slightly more euphoric feeling. It’s the respite following the gales of a pummeling storm. It’s the sun peeking out between receding storm clouds. The lyrics may not match this feeling… at all… but even they look beyond the limits of the dismal, constrained cityscape portrait painted on the rest of this album.

On the flip side of this praise… I personally can’t get into some of vocals on this record. When it’s in the lower register, things generally sound fine. But there will be these higher, somewhat monotone yells that sound off to me. It’s like something’s being held back on an otherwise very revealing effort. The vocals also seem very consistent in this approach from track to track. While I applaud this being an entirely independent, one man effort – it can’t always translate perfectly across the board. This is just one of those cases. However, what the vocals may lack in particular areas are certainly made up for by the emotion and lyrics they bring. Ultimately, they do help drive the overall theme of the music notably on some tracks. Which makes sense because, once again, this whole record centers on the singularity of a single performer which allows things to be naturally more in synch.

It’s clear that this is a record in which an artist has poured their entire soul into. It fills to the brim with an undeniable emotional impact. The results are dark and brooding but more than anything – they’re real.

It’s not a stretch to pick out a nostalgic feeling emanating from the Soul Attrition debut. There are definite nods to 90’s era Grunge music, heavy alternative music, and plenty of Sludge to trudge through. The influences listed out on the Soul Attrition page are actually pretty dead on in this regard – Neurosis, Alice in Chains, Nirvana, Type O Negative, Tool, Deftones, Nine Inch Nails, Soundgarden, Hum, and Failure. Definitely good company to be in but I’d also say Josh Parlette comes with a few surprises to call his own.

Speaking of which, one of my favorite qualities about this album lays not merely on the fact that the entire effort was constructed by a single soul. It lays in the fact that the single artist really showed up and made a good effort to stand on. Guitars, bass, percussion programming, and vocals were all done by Josh Parlette. The only assistance he received was on the recording, production, and mastering fronts but I get the impression he also did a good bit of that himself. Kudos to the true DIY artists of this world.

Now, I wouldn’t say this album is for everyone. It’s especially not for those looking for a good, uplifting time. However, for a select few, I think this album will hit the spot with its authenticity. It provides a dark portrait that’s worth appreciating. It brings a good sound and almost builds up its own world in some respects. That’s never an easy feat to pull off.

With all that being said, I enjoyed this record a good bit but couldn’t get all the way into it during my several listens. I’m curious to see where Josh is looking to take this project next because I have a feeling he may only be getting started here. There’s certainly talent and potential present and, all in all, this is both a solid effort and a good start to the legacy of Soul Attrition I’m sure a number of people will enjoy. In the end, my gut is placing this one around a 7.5 out of 10 though moments of the album tempted me to rank it a tad higher.

Reference the Bandcamp links if you want to give the music a spin for your own damn self! Likewise, look into those links to add the album to your collection!

Listeners can dig in deeper and learn more of Soul Attrition over on the official Facebook page. Give a follow and send some love if you enjoy the music!