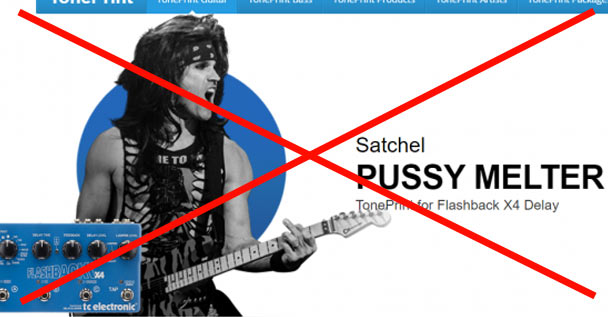 Steel Panther guitarist Satchel released an all new guitar pedal through TC Electronic called “Pussy Melter” which has since been pulled. Some people found the pedal offensive and started a petition against the company and the product. Apparently the backlash was strong enough to have the line pulled.

Steel Panther’s whole gimmick is being a lewd, comedic, and satirical Hair Metal band but it would appear that many people missed that joke on this day. Steel Panther song titles, let alone lyrics, get much worse than this. This whole drama is a bit ridiculous to be honest. Some forms of comedy aren’t meant to appeal to everyone.

Websites such as Billboard and Stereogum started highlighting the backlash, quoting artists such as Braids and Japanese Breakfast in regards to this.

TC Electronic has since apologized, stating the following to MusicRadar:

“It’s become clear that a number of people have been offended by the title and description of a delay TonePrint that we created over a year ago with Steel Panther’s Satchel. Steel Panther is an American comedic glam metal band from Los Angeles, California, mostly known for their profane and humorous lyrics, as well as their exaggerated on-stage personae that reenact the stereotypical 1980s ‘glam metal’ lifestyle (from Wikipedia). It has never been our intention to offend anyone but simply to provide fans of Steel Panther with guitar presets made by Satchel. We recognize that the material was inappropriate and we have removed the TonePrint in question from the app and we will take it down from our website as soon as possible. We sincerely apologize.”

Here are some of the band’s songs for the uninitiated: