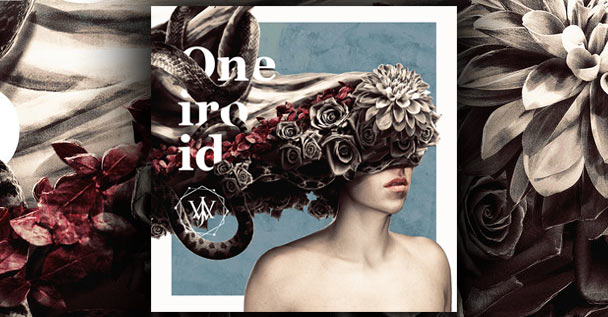 The other night, I looked up at the moon and spotted Jupiter to its lower right (with the help of an app, of course). It was a beautiful few minutes to realize just how small we are in the grand scheme of things when faced with the largest planet of our solar system. In fact, it’s 300+ times larger than the pale blue dot we call home! Little did I know, my ears would soon be metaphorically walking across that very gas giant (despite the physical impossibility of walking on Jupiter!)

On the other hand, traveling deep into the darkest crevasses of the human consciousness, Oneiroid is generally defined as a dream-like or, more so, nightmare-like state experienced in the consciousness of the mentally impaired. It is often used as a way to describe the effects experienced by those suffering of schizophrenia or other forms of psychosis.

This seems to be a somewhat appropriate pairing of concepts when heading into an album such as this… Take this solar system’s view, add a little bit of insanity, and you’ll land somewhere close to the beautiful soundscapes brought about by the St. Petersburg-based band known as Walking Across Jupiter (By the way, the band does know it’s not possible to walk across Jupiter! It’s meant to be a thematic break from reality). Their latest full-length offering struck the world last month and goes by the aforementioned name of “Oneiroid”.

Before we dig too far into this review… For those looking to dig into “Oneiroid” or add it to their collection, you have a number of options to choose from. The LP is available on Bandcamp, Apple Music, Spotify, Google Play, Tidal, and Deezer to name a few. You can also stream through this album from front to back by hitting the play button on the YouTube stream found below. No matter which option you choose, there’s likely to be some enjoyment heading your way because this album is a zinger!

Exploding out of their previous instrumental approach, Walking Across Jupiter have evolved to include vocals within their sound. These are provided by Nikita Valamin who also works on the musical front alongside Alexander Valitov. They make up the compositonal duo that propels this band towards greatness.

The albums kicks off quite low in terms of dynamics. It crawls at a whisper before slowly raising to an audible level with an entrancing hum to pull back the curtains of inherent complexity. That’s all before “Unus Multorum” comes riffing in through a number of melodic impacts. There’s a definite sense of an epic scale mixed with an emotional conflict through this track. It also introduces the unique instrumental palette that the album boasts – for example, there’s a didgeridoo and the bagpipes present! This all makes for a compelling entrance into the record.

Every track holds its weight, adding different layers to the enjoyable experience that is “Oneiroid”. “Hymns of the Valiant” holds an large, melodic scope – evolving from beautifully simple beginnings. There’s a brilliant atmospheric opening to “Samum” which now has vocals! This track has quite literally been evolving alongside the band since its introduction back in 2012! A few other tracks have evolved alongside the band as well – namely “Right To Life” and “Action-Reaction” which have, likewise, aged well. The primary difference with these re-worked tracks is that they now boast vocal performances among other embellishments to deepen their legacy. “Castaway” has some memorable riffage to say the least. “When the Day Breaks” is an absolutely lovely and melodic track. “Phantom Pain” brings what I believe to be a harp section among other stand out progressions.

While the band has shifted away from their original instrumental approach, certain tracks such as “Le Festin En Temps De Peste” and “Ask och Embla” are delivered entirely without vocals. The aforementioned “Hymns of the Valiant” also falls under this category. It’s a nice method of letting their compositional prowess shine fully because this is truly a multi-talented duo of musicians. In reality, if the very intro of this album is included, then about a fourth of the full record still comes across in an instrumental format. It’s clear that they appreciate the human voice as another instrument to use in their arsenal as opposed to an overarching necessity.

A high point of the album is undoubtedly the David Bowie “Space Oddity” cover capping off the experience. Walking Across Jupiter expertly twist this cover into something that they can call their own by changing the tone and direction of the record in a number of ways. For example, there’s a bit of a dark twist to the end of this tribute that brings out an element of the original that isn’t exactly there. It makes for a rather brilliant way to close out “Oneiroid”.

If you can’t tell from the past several paragraphs, quite literally every track on this album has been directly named in some form or fashion. That almost never happens when I go into a review and should further serve as a testament to this record’s greatness.

“Oneiroid” proves to be a very cinematic experience. This is one of the best crossovers of Progressive Metal / Rock and Orchestral music you’ll find laid out in recent years. Period. If a pair of ears happens to be attached to an overactive imagination and a pair of closed eyes, there’s no telling what Walking Across Jupiter will bring out of their mind via this listening experience. There’s a definite sense of adventure and awe to be found while listening to these tracks. The sound design exhibited on this record is sometimes quite literally out of this world.

The sheer quality of the production found across this album is absolutely spectacular. Every piece of the music fits naturally in its own sonic space (which I’m sure was difficult to achieve!) Everything comes across crystal clear without feeling lifeless. Actually the record lands on the (unfortunately) somewhat rare end of djent type Progressive Metal projects that actually feel ALIVE! Hallelujah!

I don’t really have any complaints about this record. At worst, I did think there were a few cheesy moments. For example, the ending of “Le Festin en temps de peste” rubbed my ears a bit wrong. However, ultimately, that’s all for the individual listener to process.

After several listens through the latest journey across Jupiter, the time has come to compute the entertainment factor of this project – at least from my perspective. “Oneiroid” is without a doubt a solid listening experience and one of the best entries in the modern Progressive Metal field for 2018. In the end, my gut was placing this one somewhere between an 8.5 and a 9.5 out of 10 so we’ll keep things reasonable and land it right between those two options at a 9. If you’re a fan of modern Progressive Metal music, this record could easily be considered a must listen for 2018!

So what are you waiting for!? For the final time – “Oneiroid” is currently available over on Bandcamp, Apple Music, Spotify, Google Play, Tidal, and Deezer. You can also hop on the album stream above or check out one of those music videos! Get to it!

For new fans looking to follow Walking Across Jupiter at a closer distance, you can see what the band is up to through a number of social networks. They’re currently operational over on Facebook, Instagram, and VK.

If you’d like to learn much more about the band, it’s also recommended that you read through the in-depth interview we conducted with them recently! You may do so by CLICKING HERE.