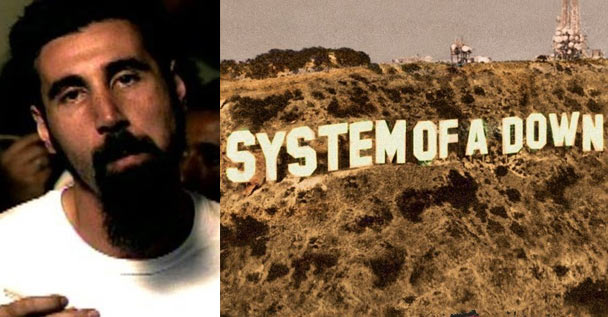 Hopes surrounding a new System of a Down album continue to dwindle. Previously, drummer John Dolmayan had a bit to say about the album’s chances, setting the stage for the current news – CLICK HERE to read & watch.

In an official newsletter to fans, System of a Down frontman Serj Tankian had the following to say:

“I have five rock songs that I wanted I do with SOAD but it doesn’t look like that’s gonna work out, so I am finishing those up to release them as a solo EP or possibly as a soundtrack for my film cause they are interrelated.”

This follows fellow member Daron Malakian and his plans to release his own songs through a new Scars On Broadway album on July 20th – you can listen and learn more about that by CLICKING HERE.

Despite hold ups in the studio, the band still has the following dates planned for later this year:

Now, in a recent interview with Incubus frontman Brandon Boyd over at Forbes, Serj had more to say on the current status of the band and lack of new music:

“Boyd: Are you guys working on new music?

Tankian: I don’t know if it is or isn’t. But it is what it is. The new music thing, there’s a lot of press going back and forth and I recently made a statement online, on Facebook, explaining the whole hiatus and took responsibility for it.

Boyd: When the time is right you will .

Tankian: If the time is right.

Boyd: You never want to put pressure on those kinds of processes. A little bit like, “Be brilliant now. Now!”

Tankian: It’s gotta be organic, it’s gotta feel right in every way. But also there’s no law that says a band should be together for a million years and have a million records. Actually, if you look over the years as a musicologist or a fan of music would, in any way, it’s probably regressive thinking.

Boyd: It’s true, if you feel vital, if it feels like you guys need to be together in a room then absolutely. And if it doesn’t then you shouldn’t force the issue.”

Serj went on to speak about how the band still plays live by stating:

“We really enjoy it. That’s the thing, over all these years, maybe we’re better friends because we haven’t made a record in 12 years. I think creating the record brings a lot of these intricate personality complex into writing, to the surface. But when we’re playing live we’re like, ‘Hey, how have you been? I haven’t seen you in a couple of months. How’s the family?’

And we have fun, we’re out there. It’s like playing basketball together playing a live show together. There’s no brain thing going on, it’s just enjoying it and doing it. That’s why we have a lot of fun. And we’ve become better friends because of it. Over the years touring here and there, a month here, two months. We’ve become better friends and closer with each other because of it.”