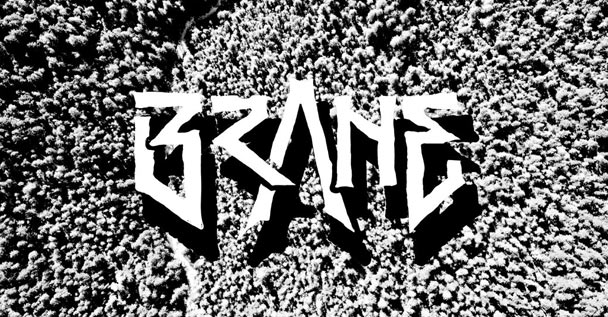 BRANE is a band hailing from the northwestern corner of the United States in Seattle, Washington. They’re a three man music unit dipped in sludge and psychedelia. As one may imagine, this involves several nods to greats of the past while simultaneously attempting to push their sound in other directions as well. It yields some nice results when all is said and done.

They recently came out with their debut, self-titled EP. It’s currently available for purchase and streaming over on Bandcamp. Likewise, it’s available at locations such as Spotify and other corners of the internet. The full experience consists of five tracks spanning a 20+ minute runtime. In about the span of a television episode, they manage to pack in a lot of quality content. But just how good is it?

Well… Close your eyes and press the play button. You may find yourself swept up to a distant location with due haste. The record opens through a dark, almost cinematic atmosphere hung up by the strings of Jacob Kennelly’s guitar and Paul Kleinschmidt’s bass. This is soon joined by the rolling drum grooves of Reed McCoy before his voice comes crashing as a raw wave. It all has a very eerie yet powerful effect on the introduction to a band that clearly has some grasp on songwriting abilities. This all comes into light on “Research Vessel”.

It actually makes perfect sense that there’s considerable chemistry found in the ranks of BRANE. Guitarist Jacob Kennelly and drummer Reed McCoy are, more or less, lifetime friends who obviously have a similar approach to how they bring music to fruition. This allows them to effectively piece together a whole myriad of effective song ideas from the simple to the more complex moments. Though it does bear saying that this record often falls closer to the side of “simple but effective” which generally takes some gusto and cohesiveness to pull off properly.

Following the opening number, things really become fuzzy as ears brush into the second track “Oyster Knife”. This is all before it comes to cut them on the edge of large, reappearing riff. “Legacy” leaves the EP’s second complete guitar solo which translates nicely as a stand out moment. “Fxv” has a nice, otherworldly effect which is especially compounded with some reverb work towards the middle and end. “Compass” finds some of the most memorable bass work on the record, opening things up nicely before the other two thirds of the band take part. It also have a really nice guitar solo which ultimately closes out the entire listening experience with some acid dripped fireworks.

There’s a definite classic feeling to this release. Everything comes across naturally and has a driving, live feeling to it. There’s a fuzzy texture surrounding the edges of the record and a third eye view on the soundscapes. That’s to say the BRANE debut EP is quite psychedelic in nature. References and nods can be found to greats lacing the 1960s onwards and it feels good for fans of the style. It’s always nice to come across some music capable of painting pictures in the mind when creativity is willing to meet the task.

However, in a way, I think the classic feeling is one of the record’s biggest strengths and weakness. It’s a strength because it translates very well into BRANE’s music. They’re good at delivering this style of sound and show great aptitude and knowledge through doing so. On the other hand, it can feel unoriginal or even forced at times. However, it’s ultimately enjoyable for what it is and the energy of the project is on a good wavelength.

However, if you’re not into the idea of a rawer, older sound in 2018 this record likely will not be for you. On the other hand, if your mind is open to such nostalgic, metallic dipped ventures – look no further! The Brane EP may place your ears right at home for a good time with plenty of replay value to go around.

One word that comes to mind while listening through this record is “adventure”. Every track present has the potential to carry listeners away into the waves of another imaginary world – given they have a big enough imagination to compliment the record. As hinted, this effect is present from the very beginning and comes in varying degrees through the rest of the BRANE EP.

Beyond what was stated earlier, I personally have two primary, subjective qualms with the BRANE EP. First, is that the vocals don’t always land in my ears. They’re generally good and full of feeling but they just sound slightly off to me at times. Another criticism of mine is that parts of the EP feel too loose. It’s generally very well executed for what sounds like a live recording but, for some reason, it doesn’t always sound on point. Others will likely disagree with these opinions but it’s simply where I stand after several listens.

Now, the time has come for a final judgement…

From the bird’s eye view, this is a good record and a worthwhile listen. It has a pleasant feeling to it that will unlock certain listeners interests like a golden key. For being an EP release, it’s really filled to the brim with some valuable nostalgia tinged content and replay value. All in all, my gut (and my ears) places the BRANE EP at a solid 7 out of 10.

It should be interesting to see how this band progresses moving forward. I have the feeling they’re only getting started on their musical journey together. They’ve already pulled some notable feats not commonly shared by debut releases and they clearly have the talent and chemistry to potentially hit a home run moving forward. Stay tuned!

With all that being said… Keep in mind, the music is currently available for purchase and streaming over on Bandcamp, Spotify, etc. You can find such streaming links provided for your enjoyment up above. Definitely give them a click and give this music a listen for yourself!