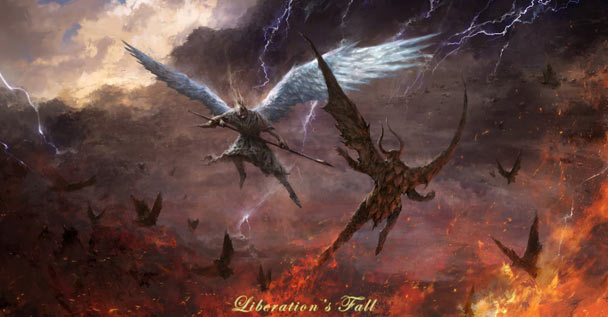 Boston has birthed yet another band worth keeping tabs on. Collector is a collective of four metal musicians that construct large scale metal music with an eye for the epic. That counts both in terms of theme and composition with a motivation to knock down mountains. The only question is have they succeeded in this endeavor yet?

The band recently birthed an independent effort by the name of “Liberation’s Fall” to plant their first flag in the metallic landscape. It consists of a total of nine tracks that collectively pack in much more than nine tracks worth of content! We’ll get to more on that later in the review…

In terms of accessing the music itself, the band has a nice website up and running where you can learn more and grab the album for your music collection. You can navigate to the site by CLICKING HERE. They also have a number of streams up and running via YouTube which will land somewhere on this review page. Feel free to click play on any of the above for a taste. Surprises await!

Now back to the review… Where does “Liberation’s Fall” land? Let’s find out!

The LP opens with a very nicely delivered acoustic guitar line which is soon joined by a cello and eventually keys. The sound is woven from clean magnificence and the arrangement itself is quite nice. There’s an instant air of a professional’s touch behind “Liberation’s Fall” as the rest of this introductory track plays out. First impressions matter and this was a good one.

The metal really hits on “Between the Two Demons” as a riff smacks below a belted vocal on high. This rolls into the first verse which turns the intensity up an additional notch. It’s a total riff fest. This is all eventually joined by clean female guest vocals (from no less than The Agonist’s Vicky Psarakis!) which flip to clean male vocals. The full track stands at around 8 minutes as an even truer introduction in terms of what to expect from the rest of the album listening experience.

That’s not to say there aren’t even more twists to be found down the line. It’s fair to state that every track has something good or even great going for it in some form or fashion. “The System Has Failed” has a bit of a political edge to it. It’s also among the heavier tracks present. “The Undead Kings” was quite an epic with another beautiful acoustic passage which melts into some nice music towards the end. The ending track “Angels” is essentially a lengthy ballad to death itself. That’s really just scratching the surface of what can be uncovered here (so listen for yourself!).

Most of the tracks found on “Liberation’s Fall” are quite lengthy. Earlier, the length of “Between the Two Demons” was mentioned. This isn’t a rarity as numbers like “A Tale of Titans”, the title track, and “End This Life” match that length and “The Undead Kings” and “Angels” even considerably surpass it. That being said, there’s plenty of content to go around here and listeners are likely to just find more and more to enjoy with additional listens – especially with the considerable effort by the Collector instrumental corps.

There are some incredibly notable features to be found across this LP. Chris Broderick (Act of Defiance, Ex- Megadeth), the aforementioned Vicky Psarakis (The Agonist) and no less than the late Warrel Dane (Nevermore) are among them. Warrel Dane brings a posthumous performance complimented by Chris Broderick on “End This Life” for one of the best stand out moments on the record. Rest in power…

There’s a definite narrative to be found with this music. Every track is attempting to convey a story through a number of mediums. The music itself brings an element of adventure through the ups and downs. The lyrics bring the literal telling of the story, and the band also throws in a number of twists to push this whole effect to the next level musically.

Unfortunately, the harsh vocals leave something to be desired. The higher pitched vocals are generally fine but the growled vocals don’t have much force pushing behind them and come off a tad weak. So, generally speaking, the clean vocals found on “Liberation’s Fall” are better than the harsh ones – especially considering the added efforts by Vicky. I also can’t say I was a big fan of the spoken word moments. The voice wasn’t suited for them and they probably would’ve been better off outsourcing or trying a different approach for these sections. It’s nice to have an album with a narrative but it has to sound appealing in one way or another because it’s still music at the end of the day. However, I can certainly appreciate the moments where the vocals twist and try new things to help push the narrative. The whole theatrical approach to this album is admirable to say the least.

Speaking of which, there’s definitely an impressive visual element to this record. Not only do the songs themselves weave together stories and sights (if you will) through sound and lyrics, the artwork surrounding the release of “Liberation’s Fall” is quite good. It’s obvious this band has a knack for presentation and professionalism which should be commended.

This extends into the overall production bolstering the record. Without a doubt, “Liberation’s Fall” sounds very sharp. Every element of the music fits naturally into a given space and everything works together well with the whirlwind of sound elsewhere on the spectrum. Every member of the band ultimately brings a stand out performance in some form or fashion and it shines together on the end product thanks to the production.

It also bears saying that the album loops back on itself very nicely from “Angels” back to “Lullaby of Eternity”. It’s not seamless and I’m not even sure if it was intentional but it always struck me as an especially nice moment between listens. In fact, this is one of my favorite effects in listening to albums in general! So, thank you Collector.

When all is said and done, it’s safe to say “Liberation’s Fall” has landed as a good album. It’s certainly not without defects but, all in all, the record comes together nicely and is worth the spins. After digesting the album for a few weeks, I’d easily give this one a solid 7.5 out of 10. It’s a good start from a band with a promising career.

There’s no doubt in my mind that Collector will continue to evolve from this point and become progressively stronger as a band. Potential is a word that comes to mind while giving “Liberation’s Fall” a listen. I wouldn’t be the least bit surprised if LP #2 takes another leap in the direction of greatness.

With all of this being said, keep in mind that the album is currently available for grabs over on the official Collector website. It’s available through several mediums for music collectors of all shapes and sizes. Once again, you can also sample the wares through all the streams across this page.

If you’d like to learn more, there are several resources through which one can tune in with Collector. You can scope them out on Facebook, Instagram, and Twitter to see what kind of moves they cook up next!

Until then… stay metal, my friends \m/