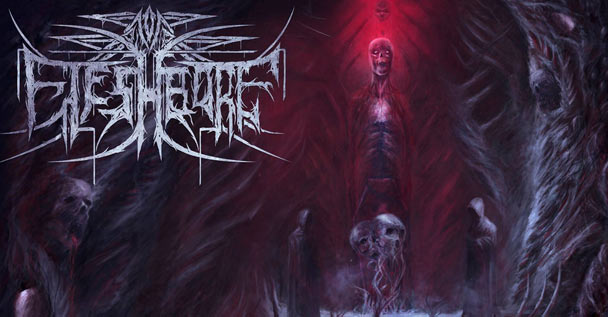 That’s what we’ve come to discuss today because there’s a new heavyweight stepping into the ring. Fleshborne are a lethal five-piece making their stand from Indianapolis, Indiana. Their aim is to spread like a disease through the extreme metal underground and decay the ears of unsuspecting listeners with steamrolling bliss.

Quite recently, they put out their debut EP by the name of “Malignancy” as an absolute stomper of the senses. It brings about a destructive force through seven tracks which prove to be a worthwhile experience for fans of the heavy. This runs across nearly a half hour’s worth of content which you can sample through the stream provided below.

Speaking of which, “Malignancy” is available for streaming and purchase in both physical and digital formats over on Bandcamp. You can also pick up merchandise and more at this location.

Now, we dig into the Fleshbore debut… This is a very heavy record through and through. It’s completely devoid of mercy standing on the promise of crushing the ear drums. Even when particular tracks like the intro, “Ruin”, and “Abyss” are not inherently meant to be heavy, they’re ominous as hell which brings its own kind of weight onto the ears.

In fact, with the exception of the last two numbers, there’s a nice atmospheric break between every track. These serve as a sort of palette cleanser between the aural assaults. Yet, in reality, they only work to build the tension towards what comes next. In that respect, they really work as a double edged sword and as a wonderful compliment to the listening experience as a whole.

Hollow notes ring through a bone dry canyon, echoing off the walls into a certain death. The intro of this record feels like descending into that canyon and merely hoping the best against doom itself… Because the record is modeled around doom itself…

The intro track then transitions into the record’s full metallic birth on the second track which is quite literally titled “Born”. A hail of riffs a blasts come pouring into the ears like molten metal. This marks more of what to expect from the band’s core sound which is essentially Tech Death mixed with elements of Black Metal and extreme atmosphere.

On that note, “Elegy” pushes the side elements further with some very nice tremolo style riffs to open. I also think it introduces more of a direct merger between the releases atmospheric elements and the all-out metal assault. In fact, one of my absolute favorite moments on the whole record lands around the close of this track.

The final two tracks “Curse” and “Terminally Ill” work as two serpent heads coiling around each other with deadly promise. There’s an undeniable sense of danger and finality to them. The tempo even seems to slightly slow in the transition like the last beats of a human heart before the ultimate silence of mortality.

The theme of this record seems to quite literally center on its title. There’s a cancer to be found through thematic darkness. The record transitions from the birth of a life and reaches death itself in the end. In fact, the record was modeled to pay homage to a loved one lost by the band. Rest in power…

There’s clearly a lot of talent to go around in the line-up of Fleshbore. Every member is capable of keeping up with high velocity playing and there’s a notable intensity in every performance. This is evident very early on in the “Malignancy” track listing and does not let up through the duration, rather turning more intense in some ways towards the end.

One of my primary qualms about this record is that it’s very quiet for a Death Metal record. I’m not speaking in terms of dynamics. I’m speaking in terms of volume. It would appear “Malignancy” wasn’t fully mastered. In fact, after scanning track #4 “Elegy”, it stood at an integrated -16.9 LUFS and seems to have a -3 db threshold in place. Unfortunately, this does dampen the experience a bit.

Other than that, the rest of the production is decent but leaves something to be desired in places. Parts of the performance may also seem loose in comparison to the usually on point execution the band brings. However, in the end, this still manages to be a very good and well conceptualized record despite its few flaws.

There’s plenty of content and replay value to go around here. As mentioned earlier, the full EP spans nearly a half hour in length. And considering the sheer note density exhibited on many of these tracks matched with the whirlwind of musical ideas, there’s a good bit to come back to. I’d say one of the biggest strengths here in the band’s compositional abilities matched with the overall flow of “Malignancy”. They’ve truly crafted an experience out of this debut effort.

As the record reaches the end of its natural life, we must make a final judgement. This is a good Tech Death record and a fairly strong debut for Fleshbore to put themselves on the map. I salute their efforts and anticipate what they pull off next. There’s a lot of potential here and I can easily see them formulating a great full-length album (whenever that time may come). However, for now, I’m feeling somewhere around a 7.5 out of 10 for the “Malignancy” EP.

Once again, the “Malignancy” EP is available for streaming and purchase over on the Fleshbore Bandcamp page. If you’d like to stay tuned with the band, they’re available on social media through a Facebook page. Show Fleshbore some love and support through these mediums!

In other Fleshbore news, we recently had a chance to interview the band and learn more about what makes them tick and their plans for domination. You can read this exchange by CLICKING HERE.

There are also upcoming opportunities to witness the band live. In fact, they’ll be opening for no less than Dying Fetus on the monstrous Contamination Tour at the Indianapolis date September 21st. Furthermore, they’ll be playing in Louisville, Kentucky on August 25th and in Lafayette, Indiana on August 18th. Come out and support Fleshbore if you’re able! Should make for good times.