Misery Signals – Karl Schubach speaks on being kicked out 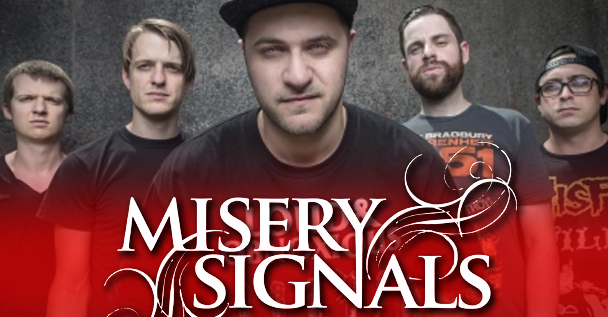 It’s been a couple years since Karl Schubach was removed from the Misery Signals line-up. He was replaced by the original Misery Signals vocalist Jesse Zaraska in 2015 and Karl has been silent since…

However, the 10 year anniversary of the album “Controller” has clearly rekindled the event in Schubach’s mind. He had the following to say about his removal from the line-up after many years of cooperation:

This year marked the 10th anniversary of what, by definition, should have been one of the greatest accomplishments of my life. Misery Signals third studio album, Controller, was released July 22, 2008. I still receive floods of messages from fans explaining how much that album means to them. To this day, I’ve maintained my silence in regards to my departure from the band which, in retrospect, might be part of the reason I find myself struggling with my mental health to this day.

Over the past few years, I’ve felt growing resentment, and increasing negativity towards my experience as a member of Misery Signals. Removal from the band has left me fighting increasing battles with depression, anxiety, and a complete loss of self-confidence that has severely affected my personal relationships, and has hindered the way I interact with people. In order to grow, move forward, and begin the healing process I feel there’s no better time than this 10 year milestone to shed some light:

I received a phone call from Ryan in early October, 2015. It was only a week or so after I had made the drive two hours north to link up with Kyle and Stu at a Comeback Kid show in Saskatoon, Saskatchewan. It had been a while since I had any communication with the guys, as no touring plans were in the immediate future. After the formalities and courteous catching up on life, Ryan’s tone shifted. I already knew what was coming, I could feel it in his voice. He proceeded to inform me that the band collectively had decided to continue on with the original vocalist Jesse, which whom they had re-established their relationship with through performing together on the Malice X tour a few years prior.

For those who don’t know how I came to join the band, I submitted an audition via Myspace of myself singing over an instrumental track off their first record. At that point, they asked me to come down to Madison, WI in order to do an in-person audition, and to pack like I wouldn’t be coming home for a while. After a week of auditions and rehearsals, it was official: This random kid from Regina, Saskatchewan, Canada became the vocalist of his favorite band.

Everything was great in the honeymoon phase. Being on tour, in a different city every night, playing music to hundreds of people, sharing a stage with my idols…every….single….night. I was in no position to call any shots, nor did I want to. I was the new kid, and a literal stranger thrown into a world that was completely unknown to me. These guys had been touring together for years. They clearly had everything figured out. I was content in just being along for the wild ride.

Communication had never been the band’s strong suit. Although tempers never flared, feelings were rarely expressed. It felt like we would rather just bite our tongues, rather than butt heads in an effort to avoid confrontation. Quite simply, it was easier this way. I was guilty of it just the same.

Towards the end of an Australian tour, Stu and Kyle both announced their intentions to leave the band upon our return home. I remember Ryan and I having a conversation about the future of the band, and how he thought it should play out. Eventually he ended up recruiting Greg Thomas, who we had met while he was filling in on guitar for Shai Hulud. With Greg in the mix, it came time to start the writing process for what would become Absent Light.

Something changed in me during the writing of Absent Light. I felt like every decision was being made without my consideration. As if my opinion didn’t count for anything. Seven years, hundreds of shows, thousands of miles, and here I was still feeling like the new kid as I perceived to watch Greg waltz in and immediately get to start calling the shots alongside Ryan as to how things should sound, the recording process, the mix, etc.

That was the first time I could pinpoint that something wasn’t right. I found my mind constantly taking me to a dark place where I only had the ability to feel like a victim, and like everyone was out to get me. Every set of thoughts was illogical, and irrational. Nothing made sense, but I still tried to justify my sporadic thought patterns. Rather than seek help, or make anyone aware, I shut down. I became distant, passive, and secluded. I had trouble sleeping, and staying focused. All motivation, creativity and passion seemed to vanish. I felt numb…..empty.

I contributed almost nothing to the lyrical content of Absent Light, as I simply couldn’t find the inspiration anymore. That same inspiration, which at one point flourished, had simply evaporated. I removed myself from the recording process of Absent Light and returned home to Regina, where I tracked the vocals in my home studio to the lyrics and vocal patterns that Ryan provided.

The album released a few months later, and a very light touring schedule was set up to support it. The runs were much shorter than what we were typically used to, but that didn’t seem to change anything. I was miserable on the road, completely disengaged from everyone. I was content in being in a bubble 23 hours of the day, playing the show, and then returning to isolation. This wasn’t a healthy existence for me, or for the rest of the band members. I knew it. They knew it.

Flash forward to a day after that phone call: I was angry. I felt used, discarded like a piece of trash tossed to the roadside out of a moving vehicle. “How dare they?!” For them to simply tell me my services were no longer required after essentially putting “real life” on hold, and investing 9 years into helping them to continue living out their dream. No severance package, no two weeks notice, just simply: “welp…See ya later”. It’s taken a lot of time and self-reflection to realize their decision to remove me from the equation wasn’t out of malice (bad reference, I know), but as a necessity for both parties to be able to continue a healthy existence.

Up until recently, I hadn’t listened to a Misery Signals song since that phone call. The countless framed tour posters, magazine articles, vinyls had been collecting dust in a dark corner of my basement for years, rather than being out on display. It pained me to look at them, because I collectively associated them with the result of that conversation, and not the incredible memories and friendships that each of them represented.

In an attempt to heal, I’m letting go of the resentment. I’m taking ownership of the role I played, and the end result. I’m dusting off those posters, and hanging them on the wall, as I feel like I can finally show how proud I am of what I accomplished in that time.

To Ryan, Branden, Kyle, Stu & Greg: I haven’t had the opportunity to tell you I’m sorry. I’m not proud of what I let myself become, and ask that you forgive me for not having the strength to get the help I needed back then. Part of me wishes things could have been different, but most of me also thanks you for doing the right thing. I wish you nothing but the best of luck with Jesse and the new album. I’ll be one of the first to pre-order it.

To everyone else: I hope that by reading this, I haven’t let any of you down. If any of you are struggling with depression or anxiety, please make getting help a priority. Don’t let it go untreated. If you feel alone or like you have no one to talk to, please message me. I’d be happy to help in any way I can.

Writing this all out has actually been very therapeutic. To the point where I now feel the need to rephrase the very first sentence I wrote:

“This year marks the 10th anniversary of what, by definition, is one of the greatest accomplishments of my life.”