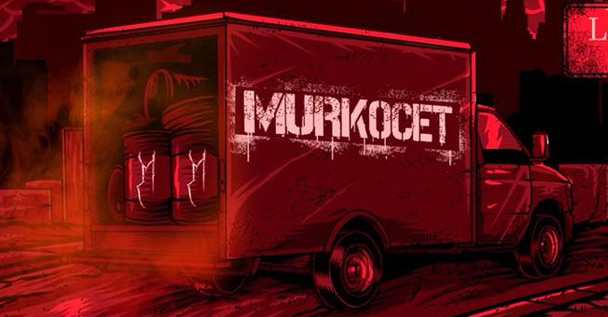 Murkocet are a metal band on the rise from Chandler, Arizona. They play a groovy, heavy hitting style of metal music that could easily be recommended to fans of Lamb of God, Slipknot, Hatebreed, and the like. You might just get hooked! As such, they’ve had a list of accomplishments from having their music featured in the horror movie Strip Club Massacre and have been named as one of the best “13 Best Metal Bands In Metro Phoenix” by The Phoenix New Times.

Recently, the band put out their “Epidemic” EP which is packed with heavy listening content. You can give it a spin through the videos provided below including the “Rule The Night” music video.

We had the opportunity to catch up with the band and dig into what makes them tick. You can learn much more through the interview provided here:

We’re here with the band Murkocet! First and foremost, how the hell are you doing?

We’re doing great guys! Thanks a lot for having us!!

Sure thing. You recently put out an EP “Epidemic” to follow up your album “Digging Mercy’s Grave”. What made you decide to transition from LP to EP between these releases?

We were excited to release some new material after about a year of “Digging Mercy’s Grave” and we really wanted to put a music video together for something new as well. We are planning on getting after the album release here soon.

If you could show the world a single track from the new release, which would you choose?

We would happily show “Rule the Night” along with its new music video!

Speaking of the “Rule the Night” music video, it looked like a good time to say the least! What was your favorite part of making it?

The best part about making the video was being able to utilize a lot of the popular models from the Phoenix area, as well as getting to shoot the video at Scores Gentlemen’s Club. It was really nice to have the support of so many people that were excited to make the video and help bring it to life.

Planning any more music video releases in the near future?

Of course, music videos are a lot of fun to make. It’s always fun to find a unique and creative way to bring visuals to the actual meaning of the song.

Speaking of visuals, your music was also recently featured in a horror movie called Strip Club Massacre! How did that all come about?

A friend of mine came across a horror fans page on Facebook and saw that a movie was titled the same as our song “Stripclub Massacre”. He tagged us and from there the guys working on the movie had to have the song lead!

There’s an obvious connection between your band name and a certain painkiller with an added murk (to murder). I always thought the name was clever and was wondering what it means to you and how you came up with it?

The name was originally our vocalist’s Xbox Live gamertag, and that ended up becoming the name of the band shortly after the group started playing together. At this point it is described and recognized as “a substance that is directly attributed to its aggressive and often times violent actions of its user.”

Last year, you were honored by The Phoenix New Times as one of the 13 Best Metal Bands In Metro Phoenix. How do you feel about the modern metal scene coming out of Arizona?

We believe that the Phoenix music scene boasts a lot of talent. It was always nice to play along side some of the bands there that helped us to keep striving to become better. It really helped us to weigh out our live performance as well as our music style; as to not try to create something that has been done in the area already, or a show that would otherwise mimic that of someone elses.

For the rest of 2018 we are focused on finishing our new album and making sure that we have all the content we could possibly need to entertain everyone for a while. We are excited to start playing again the Fall and catching up with everyone and making sure that come the Winter everyone is jamming more of our new music!

Buy the tour bus, pay off all of our personal debts, get all the gear we have been looking at, and fund all of the merch we could need to extensively tour (so that we could get shirts on the backs of EVERYBODY.)

If you guys could collaborate with any artist (dead or alive) who would you choose?