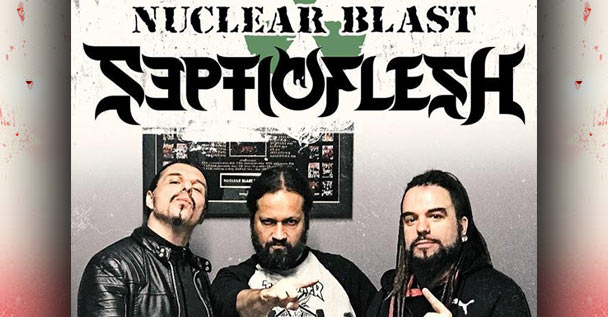 Septicflesh have officially signed on with Nuclear Blast Records! That being the case, the band will be releasing an all new album next year. Much more information to come on that…

Here’s the official statement in regards to the signing:

Nuclear Blast is pleased to announce the worldwide signing of Greek symphonic death metal outfit, Septicflesh. The group’s unique blend of symphonic arrangements, avant garde elements, atomosphere and eviscerating extreme metal has been converting legions into fans since the 90s. Now, with a streak of modern classic albums under their belt, such as Sumerian Daemons (2002), Communion (2008), The Great Mass (2011), Titan (2014), and now Codex Omega (2017), there seems to be no stopping this creative juggernaut.

“We are honored to have signed with one of the worlds leading record labels, Nuclear Blast records,” commented the band. “Septicflesh has always been a hard working band looking, to the future while keeping traditional elements and utilizing a modern and dark feel to our music. We needed someone who would understand this and we are happy to have found our new home with Nuclear Blast. In the meantime, our latest album Codex Omega continues to gain ground worldwide. We will keep touring in support of it and prepare for the conquests set before us!”

Nuclear Blast comments: “We at Nuclear Blast are fans huge fans of Septicflesh, and we’re extremely excited to be working with one of the most revolutionary and forward thinking Extreme Metal bands around. We very much look forward working with the band on their upcoming pieces of sonic art!”

Septicflesh plan on releasing their Nuclear Blast debut in 2019. More information to be announced in the near future so stay tuned.

See More: Death Metal, Septicflesh, Symphonic Metal
« Pig Destroyer release “Mt. Skull” music video
The Ghost Inside drummer, “close to the level I was playing at when I had two legs” »