As Oceans Interview – Into The Depths 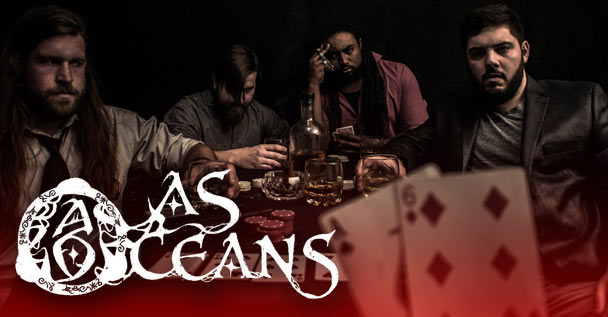 On the heels of releasing their explosive new album “Still Miles to Go”, we had the opportunity to catch up with North Carolina’s very own As Oceans. This band has been doing great work for some time now, releasing 2 quality albums and 2 EPs since (not to mention a split and some singles) since their inception in 2011. They produce hard hitting metal music with no shortage of energy and talent.

You can give their music a listen through the videos and streams provided below. All of their work is also currently available for purchase over on Bandcamp!

Here’s our exchange with the band:

We’re here with North Carolina’s heavy hitters As Oceans. How life been treating you?

We’re all doing pretty well. Right now preparing for hurricane florence. Battening down the hatches. This past year as a band after being away for awhile has been really good to us

You recently put out your third full-length album “Still Miles to Go”. It’s a great record. How do you feel you’ve grown from “The Relics of Axiom” into this new release?

We’ve simplified things on this new record that ultimately may have made our songs more digestible to a wider audience. We have also opened ourselves to different approaches and songwriting, adding different instruments and elements of ourselves and our influences.

Is there a particular concept behind the new album?

Growth. Since putting out our last record we’ve all personally experienced a lot which has forced us to grow. Broadly speaking, that takes a lot of self reflection, that may at times manifest in resentment, anxiety, and even anger. We explored those emotions as people and ultimately as a band on this record. Although the road to get here was long, we know we still have a long way to go to finish what we set out to accomplish.

How do you feel about the response to the new music so far?

We are definitely not at the peak of our momentum but the response that we have had has been positive. Maybe we lost some folks along the way due to a hiatus and slight sound change but we aren’t looking back.

If you could show the entire metal community a single track from the album right now, which would you choose?

The second song off our new album called, “Wanderer Above the Mist” because It has the most energy and is a definite staple in our live show now.

“Splinters” is difficult in a instrumental sense and a vocal sense. It is definitely the most “Doom”-y song that we have crafted to date. Most of our songs have a positive angle but Splinters is just raw and pissed off the entire time. Having to recapture that while performing and bringing that pain to the surface is difficult, yet very cathartic.

You launched a music video for the track “Wanderer Above The Mist” with some very cool, natural visuals. Where did you film the video and what was your favorite part about making it?

We filmed the video in two locations. Linville Falls and Wiseman’s View. Both are located in the Appalachian Mountains of North Carolina (Represent!) and required a little hiking. We had to lug all of our equipment for about a 3 mile trek to grab the river shots. Well worth it since the shots that our drummer Ben Dunlop captured are incredible. Best part of the whole thing was the fact that we were shooting this wild and crazy metal video in a national park open to the public. Families are walking by looking at us, “weirdos” in such a confused manner, we couldn’t help but chuckle a few times. A lot of the Dads that went by threw up the Devil Horns at us or asked where they could find our music. Who knows maybe we got a new fan out of it!

If you were given an unlimited budget to make a new music video, which track would you choose to make it for and what would the video be like?

The answer varies for each member but collectively I think we would all go with “Snake Oil.” When writing that song we envisioned a very revolutionary almost “V for Vendetta” vibe so we would probably incorporate some similar imagery from that film. You guys just might get to see a video for “Snake Oil” in the coming future!

You had a nice voice over sample on “The Gulch”. Out of curiosity, who was that speaking?

It is a sample taken from the film “Waking Life” and is a quote said by Louis Mackey.

You recently signed on with the good people at Subliminal Groove Records which is actually a pretty great fit for your sound. This is after self-releasing your previous records. What made you decide to sign?

We wanted to expand the potential for the band. Work with people who wanted to invest the time in all the extra crap a band has to do to stay relevant. The older you get things start to pile up making it hard to focus on being an artist sometime. So while we still pride ourselves being very hands on the great people over at SGR have taken a lot of weight off our shoulders and have encouraged us to focus on the music and art. Which is what makes us even more excited for future releases as AO.

You’re going to be headlining a day of the Wilmington Death Metal convention! First off, congratulations on the spot. How stoked are you for that?

Super excited! We have actually never had the chance to play in that part of NC before so it will be a lot of fun to reach people out that way. This will also be after one of the biggest hurricanes to hit NC to come through so getting to do our part to break people’s mind away from whatever damage Hurricane Florence will evoke is humbling and part of why we make music.

Do you have any favorite stories from playing live shows or from touring?

Knotfest as a whole was an incredible opportunity for us and is probably the coolest thing we’ll ever do as a band and people! Having people from across the country sing the words to your songs back to you is mind blowing. Getting to rub elbows with Corey Taylor was unforgettable as well.

Stretching, getting into our own headspace. Logan puts in his contacts and goes Super Saiyan.

If you could tour with any three bands in the world, who would you choose?

As I Lay Dying, Devin Townsend and Slipknot

On a similar note, if you could have any single artist (dead or alive) featured on a song, who would you choose?

We already got the opportunity! Brody Uttley from Rivers of Nihil is on our track, “Satyagraha”!

Last question is a fun one… If As Oceans was a sports team, what color would your uniform be, who would be your main sponsor, and what would your mascot be?

That’s all we have for you today. Is there anything else you’d like to say to the fans out there?

Thank you all for the support over the years. From Enough Light to Warrant the Contrast to now, if you’ve stuck by us we appreciate you. There’s more on the way. Stay Heavy!