What Awaits Us “Anomaly” EP Review 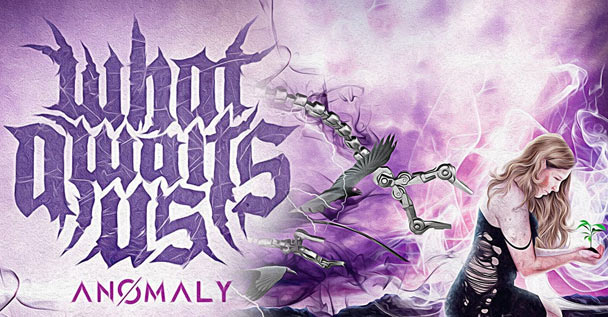 There’s quite a sound coming from the reaches of Hämeenlinna, Finland. A five-piece band going by the name of What Awaits Us has been constructing a brand of high quality Melodic Metalcore which is equal parts modern and rooted within some of the best elements found in Melodeath and Metalcore. Added with a good serving of energy and intelligence, this band brings a good experience all around!

Recently, they launched the “Anomaly” EP as a follow up to their 2015 debut album “Awake”. There have been a few member changes and some significant growth in that time. They’ve clearly pushed themselves to reach new echelons of sound with constant improvement being the target.

The new record is currently available for streaming and purchase through a number of mediums across the internet. This includes the likes of iTunes and Spotify. You can also dig in through the streams provided below. This includes their awesome music video for “Framework” which was entirely made by the band themselves! The EP itself was also self-released. Talk about the DIY approach!

It immediately becomes clear that this EP is laid out in layers of intensity. “Hayflick Limit” builds until it breaks into the listener’s ear. This serves as a good kick to the chest to get things rolling on “Anomaly”. There’s a heavy, driving force behind this record which is simultaneously aware enough to relent. That’s to say What Awaits Us aren’t merely heavy for the sake of being heavy and calculate their punches between some nice melodic songwriting. This proves to be true for the duration of “Anomaly”.

Ultimately, this makes for some very nice and sharp Melodic Metalcore. It actually causes my mind (and ears) drift back to some of Metalcore’s earlier days (circa 2010). This band feels like they would directly fit in with some of the sub-genre’s greats had this record been released years prior. Just to clarify, I mean that in a good way. There’s are moments on this record that feel comparable to names like Parkway Drive, Breakdown of Sanity, and maybe even August Burns Red at differing parts of their respective careers. That’s really just scratching the surface.

Feelings of nostalgia aside, that’s not to say there isn’t a modern edge present here. This band does bend some of the rules. Certain riffs on tracks like “Framework” and “Lithium” serve as a testament to this. This band successfully mixes the sounds of soul melting Melodic Death Metal riffs with the modern edge of a technical Metalcore sound. It’s not hard to imagine many fans of both sub-genres enjoying the end product put forth here.

Conceptually, “Anomaly” is based around neuroscience and biology. In terms of lyrical themes, the band explores the drive of humanity and our place in the world around us. There’s also an eye on the future of our race and the possibilities there. There’s no shortage of content on that front. What Awaits Us also seem to have an underlying positivity to them. All of this and more was made apparent in an interview we recently had with the band. You can CLICK HERE to learn much more!

Speaking of positivity, one of my favorite parts about this new What Awaits Us record is the potential for fun. There are plenty of breakdowns and riffs to be found across the duration of “Anomoly”. While some are more straightforward, others are quite technical and impressive. Either way, a driving force can be found behind the music with the ability to rip open mosh pits in a live setting. So, if you ever get the opportunity, definitely give this band a go on the live front! You can keep tabs with any upcoming events over on their social network pages.

All in all, this band does a very good job of writing effective music within their chosen lane. In our recent interview with the band, they said that they write music above their current skill level in order to practice and consistently challenge themselves and improve. Not only did this help them grow individually as musicians, it helped the entire line-up to create a more cohesive and ever advancing sound. This approach is just a win all around. Other bands should be taking notes right now…

That’s not to say this EP is perfect. Fun aside, it has a tendency to fall into some of the tropes of these sub-genres. It’s certainly enjoyable for a number of reasons but I often find my mind drifting around comparisons to other bands while listening. They’ve, more or less, perfected their lane but it would be cool to see them find a sound to truly call their own at the end of the day.

That goal is quite possible because What Awaits Us do not appear to be waiting on a great deal of potential and talent to arrive. It’s already there! If they keep pushing themselves the way they have been, the sky really is the limit. They just need to identify and capitalize on what sets them apart from the pack. That being said, if you enjoy what they’re up to, definitely stick around and see what they pull next!

When the gavel knocks, the final judgment must come! The one word that comes to mind around “Anomaly” is still fun. It’s not breaking into new terrain but it sure can get a listener’s pulse racing at proper volumes. The 5 tracks present often feel like they’re over too fast given the surge of adrenaline they bring. That’s just further replay value! There’s also clear talent, a great work ethic, and sheer potential present here. These are things you can never underestimate. What Awaits Us are a dangerous presence on the map of Metalcore. All that being said, I think this EP is pretty swell and would have no issue giving it somewhere between a 7.5 and an 8 out of 10. Kudos to these fellas for putting together a kickass record!

Once again, all of this band’s music is available at locations such as iTunes and Spotify. You can also click on those play buttons provided above!

If you’d like to connect with this band on social networks, you can navigate over to their pages on Facebook and Instagram. They appear to be active and entertaining on both. The band even just hosted a “What A.W.A.K.E.s Us” coffee giveaway for their fans! If their music serves as any indication, those coffee beans were well roasted…

Once again, if you’d like to learn more about what makes this band tick straight from the mouth of the beast, you can check out our recent interview with What Awaits Us by CLICKING HERE. There’s a great deal to respect and anticipate from these lads!