Agoraphobic Nosebleed vocalist leaves, “Tired of being bullied by dudes” 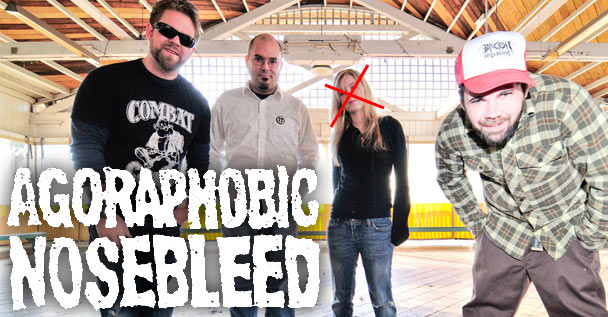 10/25/18 UPDATE – The band has released yet another statement in regards to this situation:

“If you watch footage from Agoraphobic Nosebleed’s Quebec Deathfest set from Saturday October 20, you’ll see a band of four people completely harmonious and happy to be preforming music together. Katherine Katz has been with us in ANb since around 2007-2008 and we have been fortunate to work with her. Since that time, Kat has always been treated with respect as a person and as an artist and every bit as an equal to any other member of the band. In fact, an entire EP (Arc) was written specifically for her artistic aesthetic in which she could revisit the slower, doomier music she has always loved. We transitioned ANb into playing live in 2014 because of her and Rich’s desire to do so. Kat and I have been in discussion more than any other members over the direction of the new cd. This is not to say we haven’t had minor fights here and there, because we have. No different than any other band.

“After the show around 3:30 a.m. on October 21, we all loaded the Uber with our gear to meet back at the hotel. John was taking the gear in the Uber and the rest of us were to walk and meet him there to unload. When we got there, Rich and I realized Kat had not arrived with John in the Uber. We texted her to find out if she needed help or was just off doing her own thing. After loading the gear into the hotel, she still hadn’t responded, so we all felt that we had to go back and look for her in the event something did happen to her. I texted and called her once or twice more in case her phone was buried somewhere, and she couldn’t hear the notifications—but I received no reply. Returning to the club, John, Rich, and I found no one who knew where she was. After 45 minutes or so she replied that she was fine and that she was helping some person who was having an apparent mental emergency. I told her that we were worried about her and that she should have told us what she was doing. I yelled it actually, because we were genuinely concerned and had mobilized to go find her. The rest of the evening was spent in silence. The next day flying home Rich also expressed how angry he was that Kat had trivialized his (and our) concern to another person earlier that morning.

“A couple of days later, Kat wrote an email to the entire band, explaining that she understood our concern but that she was an independent woman and didn’t appreciate being treated unequally from other members, even claiming that we wouldn’t have been so worried about any other band member in a similar situation. The email thread went back and forth between all members until Kat finally felt that she was being ganged up on, and she quit the band. No pejorative words were used. No disrespect was conveyed.

“We have always loved Kat as an artist, and as a person, and have valued her role in the band. We wish this could have been worked out in another way. But we certainly wish her well. These are the events as they happened. We yelled at Kat during this time not because she’s a woman, it’s because we had no idea what happened to her, had cause for concern to find her, and when we eventually found her and expressed that we were upset, she regarded that as an attack and felt bullied. Which, while maybe unpleasant because emotions were running high, it most definitely was not. We are not trying to devalue that she feels we all ganged up on here and we are sorry for how that developed, but it was only out of concern for her and trying to get her to understand that concern.”

Likewise, Kat Katz has responded once again by saying the following:

“I’m responding to the recent ANb post. Yes, I was trying to help someone having a mental health emergency. At that time, I was out of touch for about 45 minutes. The hotel was 5 minutes away. It was a Saturday night and busy. I was screamed at when I returned outside the hotel, in the hotel room, and in the airport.

I was in tears for most of the trip. Dude was screaming at me while I was balling my eyes out. I grew up in a household where I was screamed at by my mother with schizophrenia. I was locked in the house for a good portion of my childhood. My mother thought I had aids my whole life because of her paranoia.

I cannot handle overprotective behavior. I was belittled. I was treated like a child. I am a 34-year-old women. And I would rather die than be treated like this again.”

Original Story – Agoraphobic Nosebleed vocalist Kat Katz has been with the band since 2007. However, she just left the band with some bad blood and the following quote:

Following this, the band had the following to say:

“We’ve had some disagreements with Kat about how we should interact in the band, and as a result she quit. We wish her well with music in the future.

Scott has some writing and recording to wrap up with Pig Destroyer, and after that he’ll start writing music for the next ANb record.”