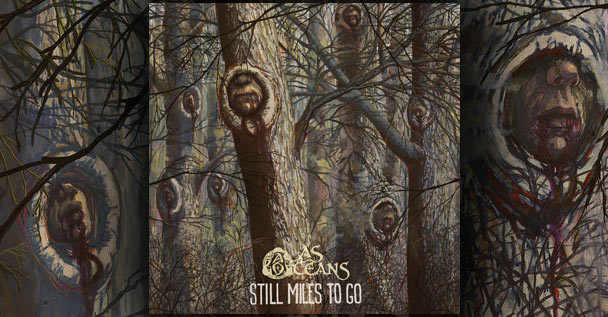 As Oceans have continuously proven themselves from the depths of the metal underground. They’ve claimed a spot among some of the finest heavy hitters to come out of the modern North Carolina scene with a damn near undeniable approach which crosses a number of metallic styles. This band has forged their sound between the likes of Groove Metal, Progressive Metal, Death Metal, Metalcore, and a modern Djent sound with no shortage of experimentation and attention to detail.

All of this has come together on one of the band’s best offerings to date! They’ve planted yet another flag on the map with “Still Miles To Go”. This is the band’s very first release in conjunction with a record abel. They’re now working with the good people over at Subliminal Groove Records. In the grander scheme, this is the third full-length addition to the band’s discography. It follows up the most recent 2015 EP “Willows” and two LPs “The Relics of Axiom” and “Enough Light to Warrant the Contrast” before that. The new record clocks in at 45 minutes between a total of 11 tracks of varying approaches. There’s certainly no shortage of content or entertainment to be found on “Still Miles To Go”.

You can dive in for yourself through the streams provided across this page. “Still Miles To Go” is also available for streaming and purchase through platforms such as Bandcamp, Spotify, Amazon, and iTunes to name a few.

So does this album reach its intended destination or truly leave the listener with miles to go? Let’s find out!

The album begins at a gallops pace as the crashing waves of a mighty sea are heard in the distance. This soundscape is soon joined by the crashing melodies of the band to make the introductory track of “Black Fish”. Things calm slightly to be joined by the vocals of Logan Lawson only to uptick again around the two minute mark with a lovely melodic texture buried in the mix. This give and take of energy is one of the key features to be found across the duration of this LP. Though introducing things at a somewhat slower pace from certain cuts on the record, this largely serves as a great introductory track to the album.

Strings eventually move in to close out the opener and introduce the massive sounds of the album single “Wanderer Above The Mist”. Strong chants and a progression reminiscent of eastern reaches quickly set this track apart before a huge metal sound comes into smack the ear. This is really the album’s introduction to the heavier groove oriented elements that this band offers. Most of the tracks on this LP consist of some unique element to set them apart while still remaining a part of the grander picture on “Still Miles To Go”.

The political implications of “Snake Oil” are immediately clear from the tone and samples from the track’s introduction. It rises into a cacophony of voices that eventually explode into a vicious breakdown. It all makes for quite a good kick to the chest as easily the heaviest track up to this point. However, as stated before, there’s give and take present on every track.

Ultimately, every track on the LP exhibits a certain unique elements along the lines of those highlighted. In fact, I would not be hard pressed to believe that As Oceans set into this album with the intention of giving every track its own herbs and spices while keeping a foot in a part of the greater whole.

I’ll give further examples for each of the remaining tracks… “Shadow Exodus” verges on Technical Death Metal at moments with a truly devastating atmospheric breakdown at another point. “Satyagraha” has an epic feel with a standout guitar solo from Rivers of Nihil’s own Brody Uttley. “The Gulch” is a lovely and thought provoking palette cleanser complimented with an awesome quote from the philosophically based, animated film Waking Life (highly recommended!). “Splinters” has a large scale, droning groove that pushes much of the track and some nice complimentary synth work and vocal samples deep in the mix. “Part I – The Knight” has some of the best clean moments on the album with a clear, nostalgic, familial pain serving as an undercurrent. This is followed by the sequel track “Part II – The Premonition” which is just damn heavy with some of the best blastbeats on the record. “Part III – The Mourning” only works to further this heaviness and has some of my favorite layered guitar work on the album. It also has a very nice flip towards the middle. Finally, the title track serves as a great closer building on top of the storytelling elements of the previous three tracks (not to mention the rest of the album!). It feels like a notable sidestep to a number of these songs and brings a true sense of finality following the experience as a whole. It actually reminds me a bit of one of my favorites from 2016 being Slice The Cake’s “Odyssey To The West”. All of those descriptions are really just scratching the surface of what to expect from these numbers. It’s recommended that fans of this band’s approach dig in and discover the primary twists and turns for themselves. It really makes the listening experience stand out in a number of ways.

If I were to describe this band’s overall approach to music with a single word, it would likely be somewhere along the lines of “grand” or “epic”. There’s a consistent larger than life feeling to these tracks. As Oceans have an excellent control of tension, consistently building and exploding these tracks with cathartic force. Through all of this, there’s also a notable realness and true feeling behind these tracks which is certainly an admirable quality.

It’s not hard at all to imagine these tracks going over quite well in a live setting. There’s a boatload of energy present which is sure to keep the band afloat even facing the toughest of crowds. When they’re not leaving boot prints across the listener’s chest, they’ve expertly soothing them into a sense of false security… just to leave more boot prints!

For only consisting of four members, As Oceans provide an incredibly large and multi-faceted sound. The voice of Logan Lawson settles at the top of the mix with both harsh and clean vocals. However, Pat Tarpey and Ben Dunlop both provide vocal elements to the band’s overall sound as well. Pat Tarpey is primarily the band’s guitarist and Ben Dunlop handles the drums. Beneath this with the rumble comes the band’s bassist Kit Brown. Together, they deal a lot of damage!

The production on this album is quite great! Everything comes across clearly no matter which end of the dynamic field the separate parts land on. The mixing brings out some very nice layered elements which show a clear attention to detail from the band both in terms of driving sound on the top level and undercurrents of atmosphere below. The entire effort just comes together very nicely on this front.

I don’t have many clear criticisms of As Oceans’ effort on “Still Miles To Go”. Sure, it might not be perfection incarnate or the most original album I’ve heard in some regards… However, what it does, it does very well. Other than that, I guess some of the clean vocals could’ve been a touch better. Even then, what they may have lacked at times, in terms of technical skill, was more than made up for with raw emotion. All in all, the band did a great job. Even after several listens, nothing else is really coming to mind on the critical front.

In the end, I have to say this stands as a very complete listening experience. As Oceans know how to weave a narrative out of sound and tie it all together nicely. “Still Miles To Go” makes for an entertaining record with some significant replay value from front to back. So, when the gavel knocks, I’m feeling somewhere between an 8 and an 8.5 out of 10 on this one. Definitely worth a listen!

If you’d like to dig in and learn more about this music directly from the band themselves, we were recently blessed with the opportunity of having an in-depth interview with As Oceans. You can go check that out by CLICKING HERE.

Once again, you can stream the music for yourself through hitting any of the “play” buttons provided above! You can also stream and add the music to your collection by heading over to Bandcamp, Spotify, Amazon, and iTunes.