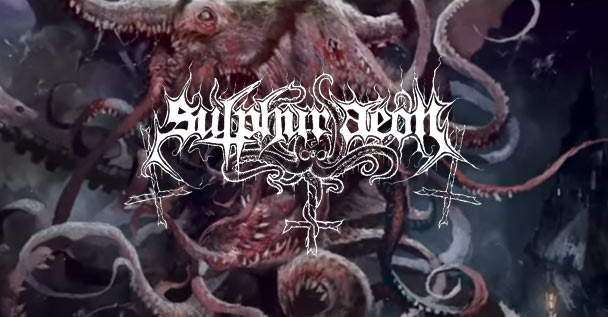 New Sulphur Aeon is on the way!? Sign me up.

Here’s an awesome, emphasis on awesome, German Death Metal unit heavily influenced by none other than the legendary H.P. Lovecraft. Sulphur Aeon’s critically acclaimed demo tape “Sulphur Psalms” was released in August 2010, followed by the “Deep Deep Down They Sleep” 7inch (released in May 2012). The debut album “Swallowed By The Ocean’s Tide” (December 2012) received worldwide praise by both the fans and the media as being one of the very few innovative and pioneering death metal albums of recent years with its deathly melange of ferocious riffs, ultra-precise drums and sepulchral incantatory chants, combined with a high level of musical competence and songwriting to the most haunting and wicked death metal. The 2015 sequel “Gateway To The Antisphere”, likewise, left minds blown across the cosmos as the band took another massive step in their pathway to greatness.

Now, they’ve geared up to release yet another terrifying entry to their metallic legacy! The new album “The Scythe Of Cosmic Chaos” is to be released during the winter solstice – December 21st, 2018! It will be on “double vinyl record, compact disc and via the known digital channels” with pre-orders presumably on the way.

In support of the new album, Sulphur Aeon have launched a jaw dropping single / video called “Yuggothian Spell”. It shows definite evolution (amazing, deep clean vocals included) while maintaining all the bands best elements. If this serves as any sort of indication, the new album with be unbelievably great! Enjoy the new track and stay tuned for much more…