Lola Black Interview – a talk with one of Colorado’s finest 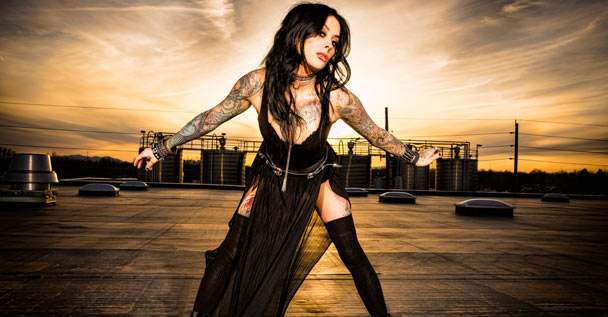 Now, for something a bit different. Denver, Colorado artist Lola Black has found a sweet spot between Hard Rock and pop sensibilities which has led her to working with the likes of Bob Marlette (Rob Zombie, Alice Cooper, Red Sun Rising) and Sahaj Ticotin (Ra). Her work has also projected her to be a mainstay within the Colorado music scene, even winning 3 Westword Music Awards and being harolded as the “Best Band in Denver” by the station 106.7 KBPI!

Very recently, she dropped an album by the name of “Nothing’s Gonna Be Alright” while working with all the names provided above. This features singles such as the title track and “All In” which come complete with music videos which can be enjoyed down below. It also includes a cover of The Weeknd’s “Starboy” feat. Daft Punk.

We were recently blessed with the opportunity of having an interview with the lady herself which resulted in the following exchange. Feel free to read on and learn more about one of Colorado’s finest:

We’re here with the one and only Lola Black! First off, how’ve you been?

Pretty good. The album is finally out! So a weight has been lifted. It’s an exciting time.

You’re also fresh off the release of a new single and music video “All In”. How do you feel about the response to that so far?

I’m pretty happy about it. The response is positive so far. There will always be the haters of course but I’m not too concerned about that.

It looks like you had a lot of fun making the video which has a bit of a gambling theme. Who in the band has the best poker face?

Probably me. I’m pretty sure poker face and RBF are the same thing and I definitely got the RBF down.

You brought up the new album “Nothing’s Gonna Be Alright” being out now! How do you feel Lola Black has evolved into the creation this record and what should fans expect?

This album was crafted to showcase our exploration of new sounds but with that also being really careful not to stray too far out of our wheelhouse. It’s really the perfect balance!

What emotions do you want people to take from your music?

I want all the emotions. There is a song for every mood on this album!

You’ve had the opportunity to work with top end producers like Bob Marlette who’s done work with the likes of Rob Zombie and Alice Cooper. How did you end up working together?

We recorded our EP “Till Death Do Us Part” with Producer and longtime friend Sid Riggs. Sid had Co-Produced together with Bob Marlette in the past and shared our music with him. He took an interest in us and we put together a few singles with him. Bob then introduced us to Producer Sahaj Ticotin and all together we went on to make our first full length “Nothing’s Gonna Be Alright”.

Speaking of connections, you’ve opened for some very notable artists over time. I saw you recently played with Korn’s Jonathan Davis, Drowning Pool, and New Years Day to name a few! What were you favorite acts to open for?

We have been very fortunate and have opened for some really cool bands. There was one show in particular that stands out to me. It was a Halloween show for KBPI with Five Finger Death Punch, HELLYEAH, Texas Hippie Coalition and yours truly Lola Black. All really cool dudes! Plus getting the opportunity to share the stage and to meet Vinnie Paul was really a special memory to me…rest his soul.🖤

If you could set up a Lola Black dream tour, who would you choose to hit the road with?

Have you brought back any crazy stories to tell from live events?

OUR LIVES IN GENERAL ARE CRAZY STORIES! LB LIVE EVENTS ARE ALWAYS PRETTY RAW…COME ON DOWN AND WE’LL MAKE SOME NEW CRAZY SHIT HAPPEN!!

Do you have any pre-show rituals?

Nothing out of the usual. Just try to keep my mile high state of mind and Pump up the jams! Pump it up!

You’ve made quite the impact in Colorado, winning 3 Westword Music Awards and being named the “Best Band in Denver” by 106.7 KBPI. How do you feel about the modern metal / rock scene coming out of Colorado? Any bands you would recommend?

Colorado’s music scene is like no other. I may be a little biased but no one can rock like Denver! One of my personal Denver favorites is- In The Whale. Those dudes work their asses off and I tip my hat to them!

Just for fun – If Lola Black was a sports team, what color would your uniforms be and who would be your main sponsor?

BLACK! Of course! Monster Energy would be a sweet sponsor. I would die without it!!

Those are all the questions we have. Do you have anything else you’d like to say to the fans out there?

Thanks so much for your time and thanks be to to the LBC for all the love and support over the years!